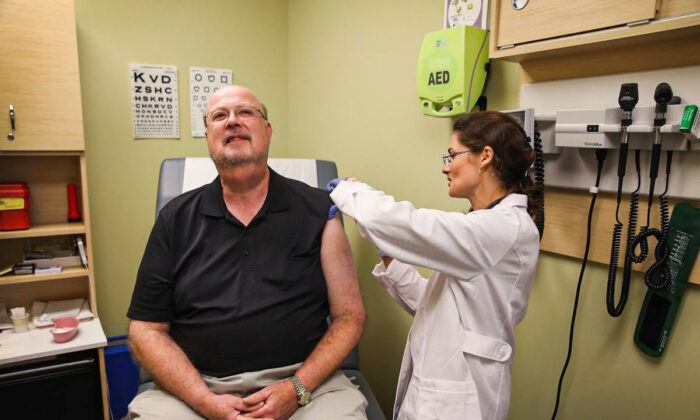 A recently introduced Oklahoma Senate bill may allow employees of government and private entities to file lawsuits against their employers for as much as $1 million over health problems associated with vaccines or other forms of medical treatment.

State Sen. Rob Standridge, a Republican, said in a statement that Oklahoma employees would be able to sue their employers over medical issues connected to operations or treatment as a condition for employment.

“If an employee is required to receive the vaccine or some other medical treatment as a condition of employment and it causes that person harm, our citizens need to know they’ll have some recourse that will provide them with meaningful relief,” he said. “That’s what my legislation will do.”

The legislation, Senate Bill 1106, allows a worker to also bring a claim if the “employer knowingly required the vaccination or treatment without confirming its safety based on publicly available medical testing and documentation,” the statement continued.

“Upon a finding of liability after a claim,” his office added, “the employer will automatically be subject to $1 million in punitive damages.”

The measure, which will be considered during the start of the 2022 legislative session, would impact all private and public sector employees and employers.

Federal health officials have repeatedly said that COVID-19 vaccines are safe and effective, arguing that some studies have suggested the shots’ benefits outweigh possible side effects.

Earlier this year, the Food and Drug Administration (FDA), along with health regulators in several European nations, said that both the Pfizer and Moderna mRNA COVID-19 vaccines are associated with two forms of heart inflammation: myocarditis and pericarditis. Meanwhile, federal health officials and European authorities paused the usage of Johnson & Johnson’s vaccine in the spring due to reports of blood clots.

The state lawmaker’s bill proposal comes after the Biden administration earlier this month unveiled a sweeping labor rule that mandates federal employees, businesses with federal contracts, and healthcare workers who are employed at Medicare- or Medicaid-funded facilities to get the vaccine.

The rule also requires that employees at companies with 100 or more workers either be vaccinated or submit to regular COVID-19 testing.

Already, both provisions of the rule have faced numerous lawsuits, namely from Republican-led states. The U.S. Court of Appeals for the Fifth Circuit stayed the regulation for private businesses last week—and later reaffirmed it on Nov. 12 in a scathing order.

“The mandate is staggeringly overbroad,” the 5th Circuit Court of Appeals in New Orleans wrote in its order before adding that the rule “raises serious constitutional concerns” and “likely exceeds the federal government’s authority.”