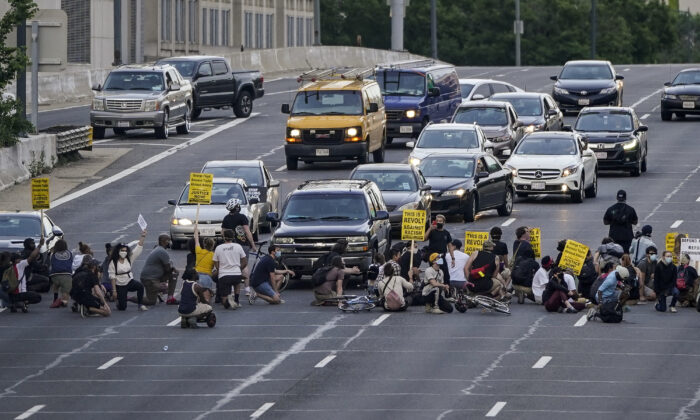 A bill that could grant legal immunity for drivers who hit violent road-blocking protesters while fleeing from them has passed the House in Oklahoma.

House Bill 1674, authored by Republican state Rep. Kevin West, was passed 79-18 on Tuesday and proposes measures to crack down on violent protesters who block roads or highways to paralyze traffic—a tactic that was popularized last year during the widespread Black Lives Matter protests—some of which turned violent.

“Last summer, during the height of violent riots that were sweeping the nation, resulting in loss of life and millions of dollars in property damage, a motorist in Oklahoma traveling with his wife and two school-aged children was surrounded by aggressive protestors in the roadway,” West said in a press release, describing a real-life incident to which his bill would apply. “The protestors beat at his truck and threw things at it, scaring both him and his family. The driver was severely chastised for trying to hurt the protesters and he even faced the possibility of criminal charges for his actions in attempting to evade the protestors.”

In that scenario, the bill would allow the driver to flee the protestors or rioters obstructing his path to safety even if it means striking them, as long as it is a “reasonable belief that fleeing was necessary” to protect from “serious injury or death.”

It would also raise penalties for individuals who unlawfully obstruct the normal use of any public roadway by impeding traffic or endangering the safe movement of travelers to a misdemeanor punishable by a maximum of one year in jail, or by a fine of up to $5,000, or both. They will also be liable for all damages done to persons or property during the course of a riot.

“I fully agree that peaceful protests are a right of the people, and I condone anyone who wants to protest peacefully,” said Republican state Rep. McDugle, who co-authored the bill. “Once anyone impedes on the freedoms of others, however, the protest is no longer peaceful.”

“I simply want to make sure people on both sides of any issue are kept safe and have the right to defend or protect their families when they feel their lives are threatened,” McDugle added.

In July last year, a black man who struck two Black Lives Matter protesters blocking a highway in Seattle, killing one and severely injured the other, was also charged with two felonies of vehicular homicide and vehicular assault, which could result in life in prison if both convicted.