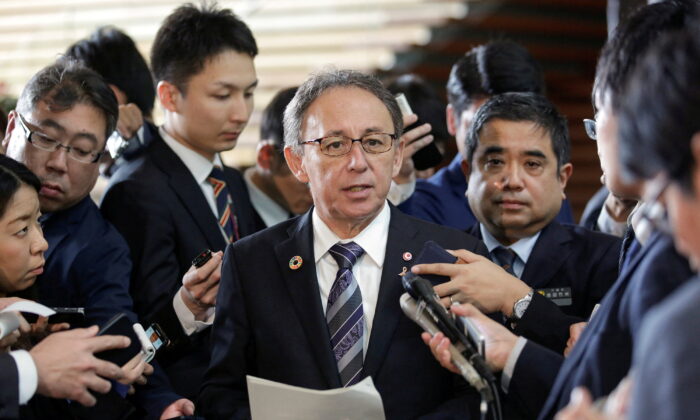 Voters in Japan’s Okinawa re-elected Denny Tamaki as governor on Sunday, public broadcaster NHK and other media said, backing an independent candidate who wants a smaller U.S. military footprint on the chain of islands near Taiwan.

Okinawa prefecture is far closer to Taiwan than to Tokyo, putting it front and centre to growing tension in the region.

China this summer launched five missiles into the sea close to Okinawa, and within Japan’s exclusive economic zone, during military exercises after U.S. House Speaker Nancy Pelosi visited Taiwan, which Beijing claims as its own.

The son of a U.S. Marine and a Japanese mother, he was first elected as governor four years ago when he campaigned against U.S. military presence. This time, he focused more on the economy, after the pandemic battered Okinawa’s tourism industry.

Tamaki enjoyed support from a coalition of opposition parties.

He told cheering supporters that he would continue to work to bolster the social safety net for the poor, although he did not skirt the contentious issue of U.S. military bases.

“I have not wavered one millimetre, nor will I, in my efforts to resolve the base issue and I will continue to share my thoughts with the people of the prefecture and seek a solution from the government,” he said.

His victory represents the challenges faced by national leaders in Tokyo working to counter aggression from China’s communist party.

The U.S. military is a hot-button issue in Okinawa, which saw some of the bloodiest fighting in World War Two and has long resented the burden of hosting the majority of U.S. troops in Japan on facilities that take up 5 percent of Okinawa’s land.

Candidates backed by the LDP won four other recent mayoral elections in Okinawa, which some said may have signaled a potential shift of sentiment on the issue.

“I think the Taiwan situation may be having a bit of an impact even in Okinawa,” Hino said.

But Tamaki has held on.

The LDP had backed Atsushi Sakima, a former mayor. Tamaki defeated him in 2018 by 396,632 votes to 316,458, partly by calling for the large Futenma U.S. air base to be moved outside the prefecture.

Sakima favoured the central government’s plan to move the base from a crowded urban area to Okinawa’s more remote Henoko district, while a third candidate, former national lawmaker Mikio Shimoji, wants it re-purposed as a shared military and commercial airport.

Tokyo’s plan seems to remains unpopular among islanders, as polls showed that 55 percent of Okinawa voters opposed moving the Futenma base to Henoko.