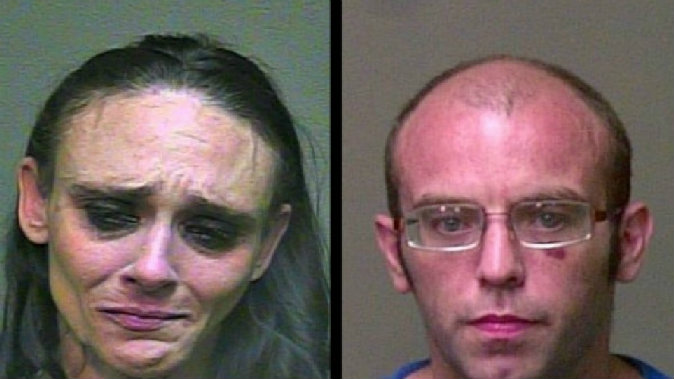 Two Oklahoma City locals are in prison after a woman accused them of abusing children, KFOR reported.

“She said that she witnessed a woman putting a pillow over a small infant, attempting to suffocate the child,” police Sgt. Jennifer Wardlow told KFOR News.

The woman then intervened and stopped Goodin from smothering the baby. She also told one of her children she would “break her neck if she did not shut up and leave her alone.”

Baker also pointed a BB gun at one of his children, the witness said. He apparently almost shot the child in the face. “The spawn of Satan and she deserves to die,” he said, according to the woman.

The couple admitted to the witness that they lock their children inside a room while they inject methamphetamine, the police report said.

What’s more, the woman said the children appeared to be “starving” and when she took the children out for food, she called 911. EMT workers came to the house and took the kids to a nearby hospital.

“The woman obviously was thinking on her feet and decided to ask the mother if she could take the children out for a walk to get them out of the situation,” Wardlow told FOX25.

Wardlow said that cops “learned that the 7-month-old, once at the hospital, had some type of a brain bleed… a serious head injury.”

“A very sad situation, obviously they’re in a better place right now,” Wardlow added, referring to the abused children. “Had [the woman who helped the children] not called, it’s possible. I mean, who knows how much longer these children would have stayed in this environment.

“They could have been more seriously injured or even killed.”

Goodin also couldn’t remember the kids’ birthdays—and he even had difficult remembering their names. Goodin, according to police, couldn’t stop moving around and appeared to be on drugs.

“Shooting up” meth, as it is called, “can drive a person to stay up and awake for days as addictive cravings turn a one-time injection into a methamphetamine binge,” says Rehabs.com, a website dedicated to dealing with drug addiction. “People who repeatedly shoot up may eventually enter into psychotic states where they hear voices, see things that aren’t there and even become violent towards others. These behaviors are signs of possible brain damage as repeated methamphetamine exposure starts to destroy affected brain cells,” it says.