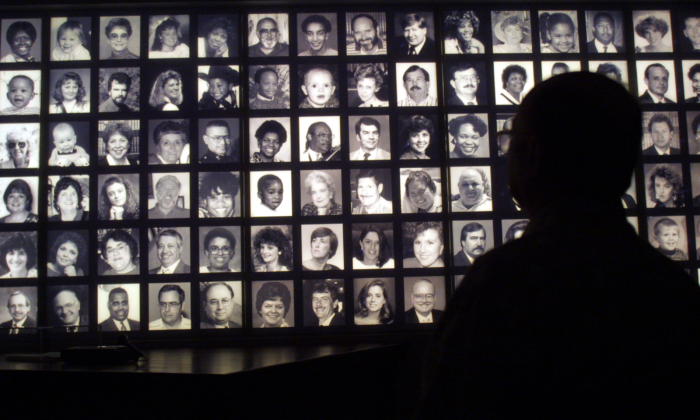 A visitor looks at the faces of some of the victims of the Oklahoma City bombing at the Oklahoma National Memorial museum in Oklahoma City June 12, 2001, one day after the execution of Timothy McVeigh. (Joe Raedle/Getty Images)
US Features

On the 27th anniversary of the Oklahoma City bombing, the deadliest domestic terror attack in U.S. history, an inmate believed to have knowledge about potential co-conspirators in that bombing languishes in a Texas prison awaiting a sex change.

Prison staff are in the process of retaining surgeons to perform the operation for the inmate, who now goes by the name Donna Langan.

Roughly 30 years ago, white supremacist Pete Langan was terrorizing the Midwest with a series of bank robberies that he committed with the Aryan Republican Army (ARA)—hiding his secret life as transgender “Donna McClure” all the while.

According to Utah attorney Jesse Trentadue, Langan holds a much graver secret to this day.

Attorneys for the former bank robber, who has reportedly disavowed white supremacism, didn’t respond to interview requests. But Trentadue provided The Epoch Times with a sworn declaration from Langan, in which he talks about his fellow ARA members sharing responsibility for the bombing of the Alfred P. Murrah Federal Building in Oklahoma City that killed 168 people, including 19 children on April 19, 1995.

According to Langan’s 2007 sworn declaration, filed for a separate lawsuit that Trentadue was pursuing against the FBI, some of his ARA cohorts were involved in the Oklahoma City attack. Langan said he first told the FBI of this in January 1996, when he was arrested in connection to the ARA’s numerous bank robberies and after agents said his friends had betrayed him.

“When [FBI Special Agent Ed] Woods taunted me with the inference that my associates had betrayed me and would testify against me, I had had enough. I told him, ‘You’re going to have problems with your witnesses, because they have the blood of Oklahoma City on their hands,’” Langan said in the declaration.

“Subsequently, my attorney informed me that the government wanted to talk to me about the Oklahoma City bombing.”

At that time, the FBI was already investigating possible links between the ARA and the Oklahoma City bombing. Among many other clues, Timothy McVeigh’s sister Jennifer had disclosed that he had sent her proceeds of bank robberies, which McVeigh said he committed with like-minded crusaders who were “at war with the system.”

Agents had also discovered that two weeks before the bombing, McVeigh had put in a call to an Oklahoma white supremacist compound called Elohim City, which was home to ARA member Kevin McCarthy and numerous other members at the time.

For his part, McCarthy told the FBI that he was staying with Langan in Kansas when the bomb exploded on April 19, 1995. But Langan said in his 2007 declaration that McCarthy wasn’t with him on that day.

Langan said he later learned that McCarthy also told law enforcement that he was in Iowa on April 19, 1995. Despite these contradictory alibis, the FBI never investigated McCarthy’s possible links to McVeigh or the bombing, according to Langan. Instead, the U.S. government cut a deal with McCarthy to testify against Langan in the robbery trial.

McCarthy got a five-year prison sentence for his cooperation, while Langan was given life without parole.

According to Langan and researchers on the subject, the FBI has sought to suppress the links between McVeigh and the ARA because of infiltration of the latter by federal informants. Along with never investigating McCarthy’s links to the bombing, Langan also accused the FBI of making ARA member Mark Thomas an informant in order to silence his knowledge of the bombing.

“Richard Guthrie had claimed that he would soon be revealing information that would blow the lid off the Oklahoma City bombing case. The next day, he was found dead, hanging in his cell, purportedly a suicide,” reads the 2006 congressional report, spearheaded by Rep. Dana Rohrabacher (R-Calif.).

“This suspicious ‘suicide’ mirrored the similar death of … another prisoner, who may have been tangentially and incorrectly linked to the Oklahoma City bombing. The death of these two prisoners, who happened to be very similar in appearance, is more than disturbing.”

Langan’s declaration was submitted in relation to a lawsuit that Trentadue had filed against the FBI for records related to the Oklahoma City bombing. That lawsuit was unsuccessful, and Langan’s information was never acted upon by law enforcement.

A similar lawsuit filed by Trentadue is still ongoing while a federally appointed special master investigates allegations that the FBI tampered with one of his witnesses, John Matthews. A former FBI informant, Matthews has said that he saw McVeigh with then-Elohim City resident Andreas Strassmeier at a militia training ground in 1994.

Langan is unlikely to divulge more information about the Oklahoma City bombing because doing so could be self-incriminating, people familiar with the matter say.