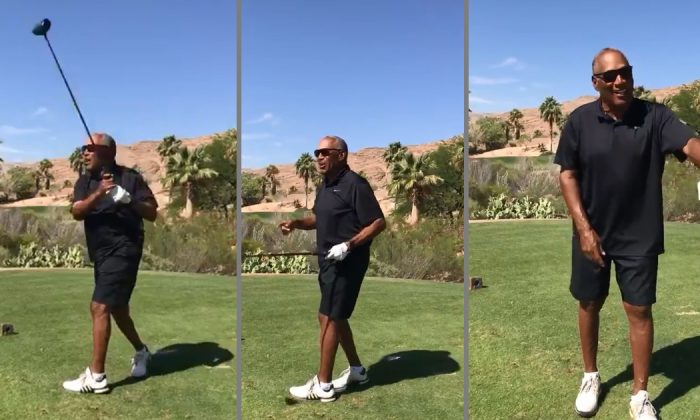 Former sports celebrity O.J. Simpson shared his own birthday message during a round of golf at an undisclosed location, on July 9, 2019. (Courtesy of O.J. Simpson/Twitter)
US News

Controversial sports celebrity OJ Simpson shared a viral video on his July 9 birthday to shed light on his turbulent life and support for the Betsy Ross flag.

Orenthal James Simpson, 72, shared a video from what appears to be a golf course to reflect on his life after being acquitted of two counts of murder for the 1994 deadly stabbing of his former wife, Nicole Simpson. He also weighed in on the recent controversy surrounding Nike’s recalled Air Max 1 “Fourth of July” trainers featuring the Betsy Ross flag.

O.J. Simpson Celebrates His Birthday, Says He’s Been Through Some ‘Hurricanes’ In His Life https://t.co/lyrJHEA8US

The former American football running back celebrated the challenges he overcame to reach the 33rd anniversary of his “39th birthday.”

“I’ve got to tell you it’s been quite a ride,” he said on Twitter. “They say in every life some rain must fall, well, I’ve had some hurricanes descend in my life but I thank the Lord because good always kept me relatively healthy and in good spirits and positive.”

Simpson described his challenges in staying positive minded despite what he called “haters” on the internet and negative opinions broadcast through cable television on “just about everything.”

He said he agreed with ancient philosopher Plato’s theory that while alternative opinions can exist there is no such a thing as alternative facts.

“[Opinions] are not fact, at the most they could be a possibility and maybe even a probability but the facts are they are not fact[s],” he said. “Opinions are like armpits, everybody has got them and most of the time they stink.”

Simpson also took a swipe at the negativity spread by former National Football League Quarterback Colin Kaepernick who complained to Nike headquarters after it released the Air Max 1 “Fourth of July” trainers with the Betsy Ross flag sewn onto the heel.

Kaepernick’s main concern was the flag came from an era in American history when slavery of black people was not prohibited by law. Simpson does not believe the flag represents any racial messages.

“As far as I am concerned that flag represents the birth of America,” he said. “What I would say is don’t let the negative win.”

O.J. Simpson is celebrating his 72nd birthday, and he’s sharing the day with his new online followers. https://t.co/HdMA7UOsW1

He also believes the United States of today has a greater representation of African Americans than when he was a child, recalling a recent softball match he watched on television with his children.

“Alabama was playing Texas and I think the pitcher of Alabama was black and the lead off of Texas was black,” Simpson said. “I thought that’s something to celebrate because when I was in school those schools would not allow blacks to play any sport.”

Simpson still believes a lot of positive things happened in his life, and he said he looked forward to continuing his celebrations.

“A lot of good things have happened in my 39 years,” he said. “I’ve got some guys to beat and some cake to eat, take care.”