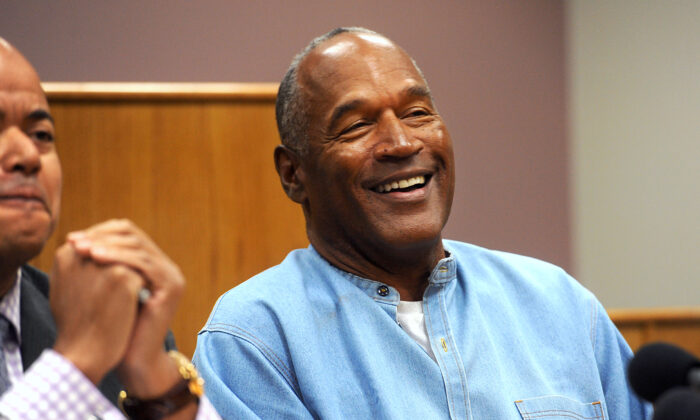 O.J. Simpson is a free man after he was granted early release by the Nevada Board of Parole earlier this month.

Simpson, 74, is a former football star and actor who was acquitted in the 1994 murder of his wife and her friend.

He was later convicted by a jury in Las Vegas in 2008 after he was accused of leading five men, two armed among them, in a confrontation over sports memorabilia at an off-strip Las Vegas casino hotel. Simpson said he just wanted to retrieve personal mementoes and items stolen from him following his acquittal.

He served nine years in prison before he was released on parole on Oct. 1, 2017.

The original discharge date for Simpson was Sept. 29, 2022. It was moved up to Feb. 9, 2022, due to good behavior. The Nevada Board of Parole majority later granted his early discharge after a Nov. 30 hearing, cutting his term by another three months for good behavior.

Simpson currently lives in a gated community in Las Vegas, where he frequently plays golf. He also posts on Twitter about college and pro sports, especially football.

Earlier in his life, Simpson was an NFL Hall of Famer and the first running back to gain 2,000 yards in a season with the Buffalo Bills in 1973. He acted in movies and served as a rent-a-car company pitchman and a football commentator.

In 1995, in what is now referred to as “The Trial of the Century,” Simpson was acquitted by a jury of two counts of murder in the 1994 slayings of his ex-wife Nicole Brown Simpson and her friend Ronald Goldman.

But a California civil court jury in 1997 found him liable for their deaths, and the court ordered him to pay $33.5 million to the families of Nicole Brown Simpson and Goldman. The amount has more than doubled since.

LaVergne said in June that Simpson also would continue to fight court orders that he owes at least $60 million in judgments from the 1994 killings.