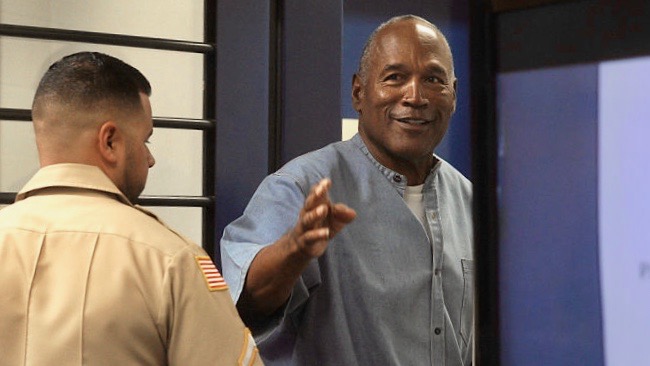 OJ Simpson Gets $20,000 Advance to Appear in Upcoming Movie

O.J. Simpson met with filmmaker and comedic actor Sacha Baron Cohen in Las Vegas. Cohen reportedly paid Simpson $20,000 for an appearance in his next movie.

A source told Daily Mail that Simpson is scheduled to appear in a prank scene. The source also said that Simpson would not even meet with Cohen in the Las Vegas hotel room until he was paid. Cohen wore a curly wig and thick-rimmed glasses to avoid detection by the public.

The Mail tracked down Simpson at the Grape Street wine bar as he dined with friends. Simpson admitted to meeting Cohen.

“I know him well. I met him. Nice guy,” Simpson told the Mail.

The meeting enraged the sister of Simpson’s deceased ex-wife.

“Nicole and Ron are two human beings who were brutally murdered. This is not a joke nor is it entertainment. If Sacha makes this a comedic effort his victims will be personified as a joke,” said Tanya Brown, via the Mail. “Shame on him.”

The lawyer for the Goldman family brought up the fact that Simpson still owes the father of the murdered Ron Goldman money from a civil lawsuit.

“If money changed hands then all of the money paid should go to Ron’s father Fred. There is a legal and moral imperative here,” said Goldman lawyer David Cook, via the Mail.

Simpson was released from prison in October, after serving nine years for armed robbery, The New York Times reported. The conditions of his probation restrict his movement, which may explain why Cohen came to Vegas instead of Simpson meeting him at another location.

O.J. Simpson has 36 acting credits that extend all the way back to 1968, according to his IMDB profile.

Details are few about the movie Cohen is making, but an article by The Telegraph indicates the title is probably “Greed” and Cohen is playing a rich character. The comedy attempts to poke fun at the world of the extremely rich.

Cohen is also working on “Mandrake the Magician,” a movie based on the long-running comic strip, according to The Telegraph.