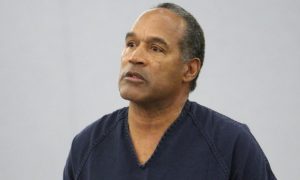 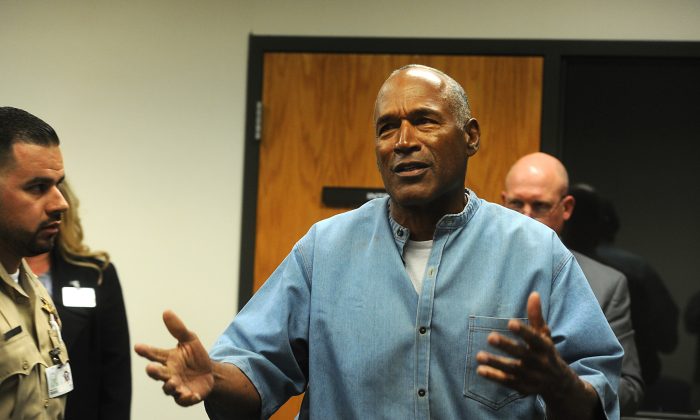 An apparently intoxicated O.J. Simpson allegedly went on a rampage in a Las Vegas bar, getting himself tossed by security and permanently banned.

Since his release from prison on Oct. 1, the 70-year-old former NFL star has been frequenting bars in the Cosmopolitan hotel in Las Vegas.

Simpson was in the Cosmopolitan Hotel’s Clique bar on the night of Nov. 8. Around midnight he was heard exchanging angry words with the hotel staff, and he then began breaking glasses, according to celebrity website TMZ.

Never know who you are going to see in Vegas…. yep, OJ Simpson pic.twitter.com/ginaBY6zwk

Security guards were summoned as escorted Simpson, who is still on parole, out of the hotel bar. When security showed up, the ex-NFL star calmed down and became cooperative, the New York Post reports. The Cosmopolitan decided to permanently ban Simpson from the Hotel.

The Post reports that the police dispatcher who handled the initial report knew Simpson well and discussed him by name when sending units to the bar, saying “Orenthal is here” in a tape obtained by TMZ. (Orenthal is the “O” in “O.J.”)

Simpson will be on parole for the next five years after being convicted of breaking into the Las Vegas hotel room of a sports memorabilia dealer in 2007. Simpson, who was apparently trying to steal memorabilia he thought had been stolen from him, was sentenced to 33 years in prison. He served nine before being released on Oct. 1.

According to Simpson’s attorney, Malcolm LaVergne, Simpson said all allegations of an altercation at The Cosmopolitan are false.

Simpson was found guilty of 12 charges including conspiracy to commit a crime, robbery, assault and kidnapping with a deadly weapon, CNN reports.

Prosecutors said that Simpson led a group of men who used threats, guns and force to take photographs, footballs and other items from memorabilia dealers Bruce Fromong and Al Beardsley on Sept. 13, 2007.

The two memorabilia dealers were in the room at the time.

According to a report from a Memphis, Tennessee news network, part of the evidence was an audiotape on which Simpson can be heard shouting orders to his companions and the two dealers, including,”Don’t let nobody out this room. … Think you can steal my (expletive) and sell it?”

Bruce Fromong said in a TV interview, “O.J. was the last person I was expecting to see and when I saw him I was just thinking, ‘O.J., how can you be this stupid?”‘

Not Guilty of Notorious Murder

O.J. Simpson was a record-setting NFL running back who played from 1969 to 1979. He then remained in the spotlight while working as a sports announcer and actor in commercials and action films.

Simpson was charged in the June 12, 1994 murder of his ex-wife Nicole Brown Simpson and her current boyfriend, Ron Goldman.

Ron Goldman’s family sued Simpson in civil court for wrongful death and won a $33,500,000 settlement, most of which they have been unable to collect.