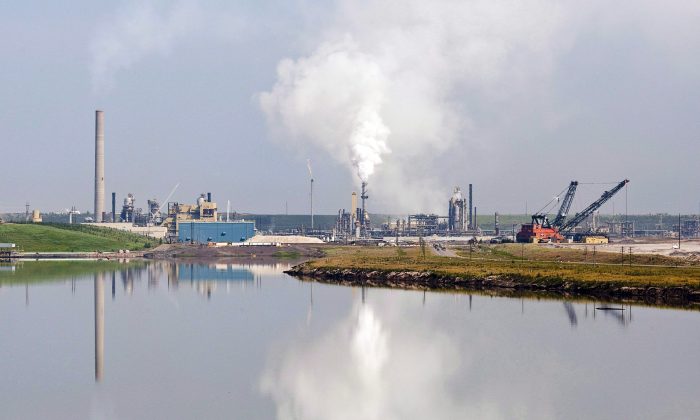 An oil sands facility tailings pond near Fort McMurray. In a letter to Alberta's pollution monitoring agency, the group responsible for air-quality testing says its mobile unit is off the road due to funding problems. (The Canadian Press/Jeff McIntosh)
Canada

EDMONTON—An important part of Alberta’s oilsands air monitoring program is off the road over funding problems.

In a letter to the province’s pollution monitoring agency, the group responsible for air-quality testing says its mobile unit is “no longer operable.”

That means Alberta could have no way to measure what’s in the air during environmental emergencies or respond quickly to community concerns, said Kevin Percy, director of the Wood Buffalo Environmental Association.

“It definitely leaves us with a gap.”

Percy said in the letter, which was also sent to association members, the 1995-vintage mobile testing van is no longer usable. Generators that run the sensing equipment don’t work. When they do, they interfere with the equipment’s sensitive electronics.

We are no longer able to respond to an emergency.
— Kevin Percy, Wood Buffalo Environmental Association

“The roof, repaired several years ago, is now manifesting small leaks again,” he wrote. “Even if we did deploy it, (the association) could not stand behind data quality and continuity.”

Percy said the association’s network of permanent monitoring stations is growing, but those 22 stations don’t cover all of the vast Wood Buffalo area.

“We are no longer able to respond to an emergency.”

The van is usually deployed a total of one month a year to industrial sites and to requesting communities, he said.

Percy’s group is funded by the Alberta Environmental Monitoring Evaluation and Reporting Agency. He said the agency asked the association to consider keeping the rickety van on the road for one more year to delay the $500,000 cost of replacing it. The agency has been allocated $50 million a year by industry.

Agency spokeswoman Val Mellesmoen said her group, entering its first year of independent operation, is evaluating the real cost of comprehensive and scientifically sound monitoring in the oilsands region and the rest of Alberta.

“Is there enough money to do the job? What is the true need for environmental monitoring?”
The industry’s contribution won’t increase in the coming year, she said.

Agency officials have previously said the annual $50-million levy may not be enough, especially if monitoring is expanded to new oilsands areas such as Cold Lake.

Mellesmoen said mobile testing units could be contracted from Edmonton, although she acknowledges it would be hard to get them quickly to regions hundreds of kilometres north.

Critics say the situation exposes a crucial weakness in the government’s monitoring plan.

“It’s been making (the association) more and more dependent on discretionary decisions by industry, which ultimately undermines the quality of work they can do,” said New Democrat Leader Rachel Notley.

“This government loves to announce agencies, then tie their hands.”

Andrew Read of the Pembina Institute, a clean energy think-tank, said the problem is the result of the monitoring agency trying to do more work without more money.