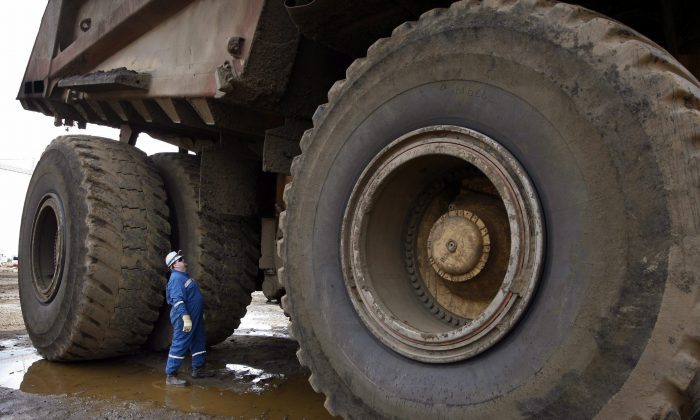 A worker inspects his haul vehicle before his shift as a driver at the Shell Albian Sands oilsands mine near Fort McMurray on July 9, 2008. The demands of working in Alberta's oilsands is taking its toll on workers' marriages, says relationship expert Debra Macleod. (The Canadian Press/Jeff McIntosh)
Canada

Alberta has consistently reported some of the highest divorce rates in Canada over the past three decades, and a Calgary-based relationship expert says she knows why.

The demands of the oilsands—which employs hundreds of thousands of workers away from home for weeks or months at a time—is taking its toll on workers’ families, says Debra Macleod, a former divorce and couples’ mediator turned relationship expert and author.

The male-dominated industry means it’s largely husbands who work in the oilpatch, while wives stay home to manage the house, kids, and often their own careers.

But Macleod believes that with the right tools every oilsands marriage can succeed, and she has made it her mission to break the cycle of divorce in the province with her new book—the first of its kind—titled “Marriage SOS: Oilpatch Edition: How Oilpatch Couples Can Prevent Relationship ‘Blow Out’ & Stay Together Even When Apart.”

As a former “oilpatch wife” herself, Macleod knows the struggles of the lifestyle all too well. Her husband worked away from home for 13 years, gone for 16 days at a time while she raised her son, ran a couples’ mediation practice, and authored books on relationship-building.

She remembers a particularly tough time shortly after her first child was born (two months premature) and her husband had been away for weeks with inconsistent cellphone service. When she finally reached him she broke down, begging him to come home while threatening to end the marriage. He raced home, putting himself at risk by driving through a blizzard for hours while worn out after a long day’s work.

“I just absolutely worked myself into a lather of loneliness—that sort hateful loneliness that only an oilpatch wife knows,” Macleod recalls.

“For me, that was a wake-up call that this had to change. I needed to find a better way to cope.”

That rock-bottom moment nearly 15 years ago helped Macleod develop tools to manage the lifestyle, and her marriage survived. Through her counseling practice she also began helping other oilpatch couples navigate what she calls a “marriage of extremes.”

Today, she is known as a leading authority on the subject, giving seminars to oil companies and counseling couples privately at her Red Deer and Calgary offices.

Oilpatch couples now make up 80 percent of her clientele in Red Deer, a city in the heart of oil country that happens to have the highest divorce rate in Alberta.

Macleod sees couples struggling with the same problems time after time: mismanaging finances when the money comes too fast; making assumptions and harbouring suspicion about each other’s separate life; resentment piling up as both feel they have the “tougher” situation and compete to get their needs met—the list goes on.

“[Professional support] is so desperately needed for these, especially young, families who have no clue how to balance such an extreme lifestyle,” she says.

“All of the regular things that we all have to deal with in marriage oilpatch couples see in the extreme—loneliness, infidelity, money issues, trust issues, parenting—you name it.”

She notes that these relationship issues are not only causing pain for couples and their families, they are also causing safety hazards and lost productivity at work, when employees become distracted, angry, worried, or homesick.

That’s why oil companies need to start educating their staff (and the workers’ wives) on how to manage their relationships and home life before they go into the field, says Macleod.

Acknowledging the issue, providing guidance and support, and even initiating “family appreciation” programs would go a long way toward fostering a healthier environment for employee success at work and home.

We’re in This Together

But couples also need to take responsibility for themselves, Macleod points out. Despite the difficulty of an oilpatch marriage she often sees couples thrive after actively seeking counselling and support.

Much of the solution is getting couples to approach the situation as a team, a “we’re in this together” mentality, she says. This can be done by paying attention to the “three A’s”: Assumption, Appreciation, and Affection—stop making assumptions about each other’s lives, appreciate your partner’s role in the relationship and the positive benefits of the lifestyle, and practice affection to nourish intimacy and friendship.

Creating “rituals” to stay connected and keep communication positive and stress down is key when hubby is at work, but equally important is effectively planning and prioritizing time together during his days off, says Macleod.

Having a plan for everything—spending, socializing, drinking, parenting, etc., can also provide couples with a sense of accomplishment, partnership, stability, and progress.

“I had a successful oilfield marriage, and a lot of people do but they have to get on the same page about it, focus on the pros of it,” says Macleod.

“There’s very few careers for a man who doesn’t have his post-secondary education to provide this wealth for his family,” she adds. “You can have your cake and eat it too, but you have to be on the same page, and you have to be supporting each other and aware of the issues.”