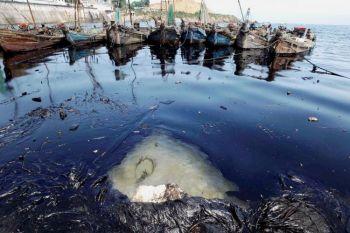 A boat and debris floating in an oil slick in the Yellow Sea, after a huge spill following the pipeline fire at the port in Dalian, in Liaoning Province, China. (AFP/AFP/Getty Images)
China

Cleaning Up Oil in Dalian a Slow Process

Hong Ning
View profile
Follow
biggersmaller
Print
After a pipeline explosion that led to at least 1,500 tons of crude oil gushing into the sea off the coast of China's Dalian City last week, fisherman and rescue workers report a slow cleanup with straws mats, chopsticks, and ladles, among other inefficient methods.

“Our family has eight boats fishing out the oil from the sea these days. My family left home at 5 o’clock in the morning. All the buckets at home are taking the oil,” said fisherwoman Yuan to The Epoch Times. Ms. Yuan is from the Jinshitan Golden Coast in Dalian, an area famous for its seafood. She complained that the authorities have not done enough to assist the fishermen in the cleanup effort.

On July 19 China’s State Oceanic Administration announced the latest estimated size of the oil slick at 166 square miles. A magnitude eight typhoon on July 20 aggravated the problem, and now small oil patches have been scattered in the vicinity.

Migrant workers have been hired to scoop up the oil with ladles, while others, wearing rubber gloves, reportedly attempted to pick up globules of the black matter with chopsticks. As the slick spreads to shore, getting the job done quickly appears increasingly remote.

Because of the inefficient cleaning process, in some areas the oil contamination has reached a depth of at least 30 cm (11.81 inches) under the surface at the shore, according to a local Shenyang Evening News report on July 22.

Fishermen tell The Epoch Times that the business losses due to the spill have been enormous, as would be expected. “We breed sea cucumbers on the shore. We have to regularly change the water from the sea. Now the sea is polluted, so we can’t change the water. The losses are huge,” one such trader said in a telephone interview.

Greenpeace director in the region Zhong Gu shares similar concerns. The organization’s investigation showed that while Jinshitan is around 22 miles away from the site of the explosion, over 10,000 fishery farms have been contaminated. “The smell of crude oil filled the air on the shore; the oil itself contains many kinds of harmful substances, and breathing in too much can cause cancer,” he said to Radio Free Asia.

According to an overseas Chinese website, propaganda officials have restricted reporting on the incident to the Chinese Communist Party’s official media, Xinhua.