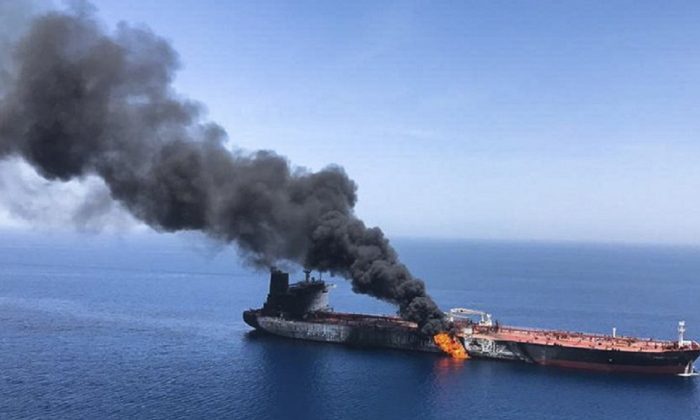 Oil Shippers Boost Security After Attacks on Tankers in Gulf

DUBAI, United Arab Emirates—A series of attacks on oil tankers near the Persian Gulf has ratcheted up tensions between the United States and Iran—and raised fears over the safety of one of Asia’s most vital energy trade routes, where about a fifth of the world’s oil passes through its narrowest at the Strait of Hormuz.

The attacks have jolted the shipping industry, with some of the 2,000 companies operating ships in the region on high alert and ordering their vessels to transit the Strait of Hormuz only during the daylight hours and at high speed.

Washington’s accusation that Iran is behind the attacks targeting oil tankers comes as tensions flare between the two countries. The United States has deployed an airstrike carrier and bombers to the region, and announced this week it will send 1,000 more troops. European powers are facing a deadline from Tehran to ease the effects of punishing U.S. sanctions—described by its leaders as “economic warfare”—or Iran will break out of the limits set on its uranium enrichment by the landmark 2015 nuclear deal.

The apparent targeting of tankers is alarming to ship owners operating in the Persian Gulf, said chief shipping analyst at BIMCO, Peter Sand. The company dubs itself the world’s largest shipping association.

But it’s more or less business as usual for shippers, he said, despite the need for added precautions.

“They are all of course increasingly worried, but many of them are going with business as they would have done without the attacks, but of course with an extra layer of safety and security measures on top of that,” Sand said.

That means going at high speed through the Strait of Hormuz, which at its narrowest point is about 3 kilometers (2 miles) wide. Normally, vessels carrying cargo would slow down to save on fuel costs.

It also means avoiding the strait at night to keep better watch on security around the vessel.

Washington alleges Iranian forces surreptitiously planted limpet mines on two vessels in the Gulf of Oman last week. The attack forced the evacuation of all 44 crewmembers onboard and left one of the ships ablaze at sea.

Washington also blamed Iran for similar attacks on May 12 that targeted four oil tankers anchored off the coast of the United Arab Emirates. Iran denies being involved.

The attacks last week targeted the Norwegian-owned MT Front Altair, which had a cargo of highly flammable naphtha loaded from the UAE, and the Kokuka Courageous, a Japanese tanker carrying Saudi methanol. Both had been traveling through the Gulf of Oman, having passed the Strait of Hormuz.

Of the roughly 2,000 companies that operate ships in the Persian Gulf, only two companies have halted bookings outright. Otherwise, “business has continued more or less undisrupted,” Sand said.

In fact, higher risks could boost the bottom line for some oil shippers, after a lackluster period for the industry. A risk analysis by shipping services company Braemar ACM said owners can ask for higher premiums now. The firm said the Gulf region was declared as a “Listed Area,” meaning it faces enhanced risk, after the May 12 incidents targeting tankers off the UAE coast.

With increased risks, however, come higher insurance premiums, which are expected to rise 10-15 percent.

It’s typically the buyers and charterers who bear the brunt of the overall higher costs, another reason why security of the Strait of Hormuz is paramount for oil-importers around the world. An estimated 18-20 million barrels of oil—much of it crude—pass through the strait every day. BIMCO says anywhere between 10-40 vessels carrying just crude oil move through daily.

During the so-called Tanker War of the 1980s, when Iran and Iraq targeted vessels carrying one another’s exports, the U.S. Navy escorted oil tankers through the Persian Gulf to ensure American energy supplies. But the United States is no longer as reliant on Arabian producers.

Indeed, the MT Front Altair was headed to Japan; the Kokuka Courgaeous reportedly to Singapore.

The Washington Post quoted this week Air Force Gen. Paul J. Selva, vice chairman of the Joint Chiefs of Staff, as saying that because most of the oil passing through the Strait of Hormuz is headed to Asian markets, it would be ill-advised for the U.S. military to take the same role it did in the 1980s. He said there were plans to reach out to the big Asian oil-importers about a possible international effort to safeguard tanker traffic.

Robert Macleod, CEO of Frontline Management, whose vessel Front Altair was targeted last week, said the general area of the Strait of Hormuz “represents a real and very serious risk to shipping.”

In a statement, he said crews must be on high alert while traversing through the passage. The company, however, said it had re-commenced trading in the region after briefly halting it following the attack. He said the company also tightened security measures, but did not elaborate.

One extraordinary measure ship owners might consider, if the situation deteriorates further, is having armed guards onboard. This is already the case for many vessels transiting the Gulf of Aden, where piracy is a major concern.

“From a shipping industry perspective, we are certainly not in favor of bringing more armed guards onboard international commercial ships because they are not warships,” said Sand. “They should not be carrying arms. They should be able to transit without being interrupted.”