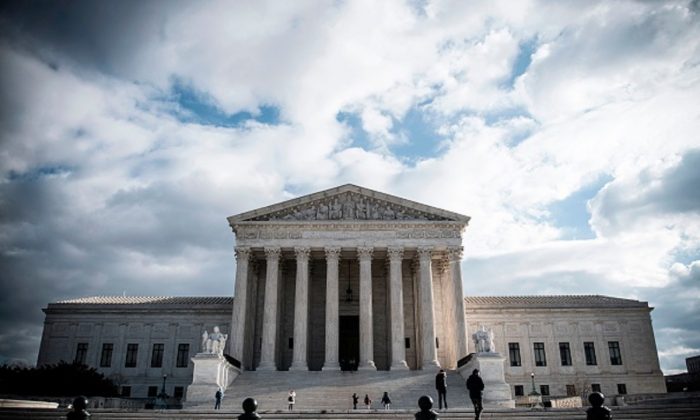 The Supreme Court Building is seen on in Washington on Dec. 24, 2018. (Eric Baradat/AFP/Getty Images)
US News

WASHINGTON—A lawyer for an offshore oil rig employee who worked on the federally administered Outer Continental Shelf outside the three-mile U.S. jurisdictional limit told a skeptical Supreme Court on April 16 that federal law requires that California employment law be used to resolve the man’s pay dispute with management.

After Texas and North Dakota, California is the third-largest oil-producing state. Oil is produced on 32 offshore platforms and artificial islands in Southern California, according to The Mercury News of San Jose.

A ruling by the Supreme Court for the worker in this case could raise oil production costs. The Trump administration sided in the high court with the employer in the case, Houston-based Parker Drilling Management Services Ltd.

The financial claim was brought by Brian Newton, who worked on the company’s drilling platforms in the Santa Barbara Channel from 2013 to 2015. Newton worked 14-day segments, with 12 hours on duty and 12 hours off on what his attorneys call “controlled standby.” A number of employees shared his schedule but others worked the other 12-hour shifts which let the platforms function 24 hours a day.

Newton was given his base pay for the first 40 hours each week plus 44 hours at the overtime rate. He also was compensated for travel time to and from the platform, as well as for time spent debriefing alternating crew members. Newton wants to be paid for off-work time spent at the facility, including sleeping. Federal law does not require employers to cover off-work time but California law does. Newton alleges the company violated state minimum wage laws, did not pay double time rates, and failed to offer meal breaks.

During oral arguments, Christopher G. Michel from the U.S. solicitor general’s office spoke in support of the company’s position.

He said more than 70 years ago, the Supreme Court “clarified the federal government’s paramount sovereignty over the continental shelf.”

“Congress reinforced that interest throughout OCSLA [Outer Continental Shelf Lands Act], including its choice of law provision” that “creates one body of law, a body of federal law,” and adopts state law as “‘the law of the United States’ to the extent it is applicable and not inconsistent with other federal law.”

Newton’s lawyer, David C. Frederick, told the justices that the 9th Circuit Court of Appeals was correct to rule in his client’s favor by “determining that the California Labor Code provisions at issue here are both applicable and not inconsistent with federal law.”

Justice Samuel Alito rejected one of the contentions made by Frederick, telling him it amounted to saying that California “extends 200 miles out to sea.”

“And Congress could have just said that and said California extends 200 miles out to sea; however, within this part of California, federal officials will enforce the law,” the justice added.

Frederick replied, saying California law governs in this situation because “our client’s shift begins and ends in California onshore in the uplands. The first two to three hours of every one of his shifts is exclusively within California, when he gets briefed for safety, when he gets the bus down to the port” to be transported to the platform.

Justice Ruth Bader Ginsburg told Frederick “a state is not sovereign” over the shelf.

The lawyer for the company, Paul D. Clement, acknowledged that the federal government can defer to a state applying its law to its own sovereign territory, saying in effect, “Well, your state law can apply if it’s more demanding.”

“But that principle is completely out of place on the Outer Continental Shelf, where all law is federal law,” he added.

The National Ocean Industries Association has urged the administration to appeal the ruling because “a court with more experience and knowledge of the full breadth of the executive branch may very well come to a different conclusion.”