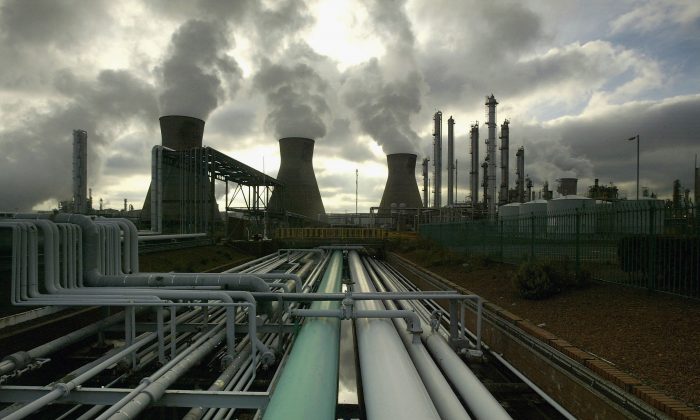 A huge oil refinery complex continues it's 24 hour production of petroleum and gas in Grangemouth, Scotland. Around 60 percent of oil and gas professionals think the recovery in oil industry already has begun or will begin in 2017, according to a survey. (Christopher Furlong/Getty Images)
Business

Confidence is returning to the oil industry, and the two-year downturn in oil prices may be coming to an end. But there are still some factors that create uncertainty in the near term, according to experts.

“We are still not quite there. We will probably get close to an oil supply and demand equilibrium by the end of this year or early 2017,” said John England, vice chairman and U.S. oil & gas leader at Deloitte LLP.

The fall in U.S. crude inventories, the decision by OPEC to cut production in November, and the global economic outlook are all key factors in determining oil prices, according to England.

The low oil prices took a toll on OPEC members. … I think they have reached a point where they really need to get something done.
— John England, vice chairman, Deloitte

The members of the Organization of the Petroleum Exporting Countries (OPEC) agreed to cut oil production on Sept. 28. This is the first agreement to cut supply since 2008, according to the U.S. Energy Information Administration (EIA).

The global benchmark, Brent crude, has risen by nearly 10 percent to above $50 per barrel since the OPEC deal.

The World Bank revised its 2017 oil price forecast from $53 to $55 per barrel, following OPEC’s announcement.

“We expect a solid rise in energy prices, led by oil, next year,” said John Baffes, senior economist at the World Bank, in a press release. “However, there is considerable uncertainty around the outlook as we await the details and the implementation of the OPEC agreement, which, if carried through, will undoubtedly impact oil markets.”

OPEC members set a supply target of between 32.5 million and 33 million barrels a day. But they have not set quotas formally. The details will be finalized during the next OPEC meeting on Nov. 30.

“The low oil prices took a toll on OPEC members, who are so reliant on oil for their economies. So I think they have reached a point where they really need to get something done,” said England.

However, there is a question about enforcement of those quotas and whether the member countries would actually hold on to them, he said.

“Recent comments by Saudi Arabia and Russia point to a greater probability of a production cut, although higher production from Libya, Nigeria, and Iraq are reducing the odds of such a deal rebalancing the oil market in 2017,” stated Damien Courvalin, head of energy research at Goldman Sachs, in a report.

“Failure to reach such a deal would push prices sharply lower to $43 per barrel in our view as we forecast that the global oil market is in surplus in 4Q16,” stated the report.

Iraqi oil minister Jabar Ali al-Luaibi announced on Oct. 23 that the country wanted to be excluded from OPEC’s planned output cuts. Iraq is the second-largest OPEC producer after Saudi Arabia.

U.S. crude storage levels have been falling for the past several weeks, another factor driving the oil prices up. During the week ending Oct. 14, U.S. crude stockpiles dropped by 5.2 million barrels. This came as a surprise to many analysts who were expecting an increase.

“The U.S. producers have done a remarkable job of reducing their costs to be competitive in this price environment. A number of them have been able to get their costs down and make money at around the $50 level,” England said.

“But that is not true for all of them. That is why you have seen so much production coming offline.”

According to a survey released by Deloitte, around 60 percent of oil and gas professionals think the recovery in the oil industry has already begun or will begin in 2017.

Executives expect oil prices, capital expenditures, and headcounts to rise next year. And they believe $60 per barrel is an important threshold for a recovery in exploration and production activity in the United States, according to the survey.

“There is growing evidence that not only is the global oil market back in balance, but there is a strong possibility that global demand is already outstripping daily oil output,” wrote Phil Flynn, senior market analyst at the Price Futures Group, on the company’s blog.

“The conversation in oil will start to change from the talk of glut to the talk of shrinking global supply.”