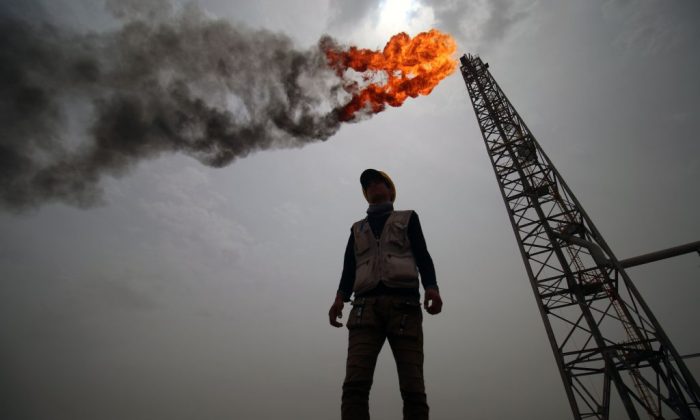 An employee stands at the Hammar Mushrif new Degassing Station Facilities site inside the Zubair oil and gas field, north of the southern Iraqi province of Basra on May 9, 2018. (HAIDAR MOHAMMED ALI/AFP/Getty Images)
Markets

Prices won’t spike to $100 a barrel or higher in the near future, says expert
By Emel Akan
biggersmaller
Print

Heightened geopolitical risks and market fears of a looming supply shock pushed oil prices to their highest level in May in nearly four years. However, an oil expert says that these are short-term blips, and that there are plenty of options for oil producers to ease price hikes.

New U.S. sanctions that may hit Iranian oil exports and plunging Venezuelan crude production have raised fears of global supply disruptions, sending prices above $80 a barrel in May. Some even speculated that oil prices would jump to and probably beyond $100 per barrel next year.

“Structurally, there shouldn’t be enough pressure on the market to take us back into that very high-priced world,” said Andrew Slaughter, an energy expert and executive director at consulting firm Deloitte Services LP.

He believes that oil price could remain “lower for longer.” “That doesn’t mean $30 or $40 necessarily, but we’re not going to see $100 again very quickly, at least on a fundamental basis,” he said.

In early 2017, the oil price started to see a slow and steady recovery after the Organization of the Petroleum Exporting Countries (OPEC) reached a deal to curb oil supply. OPEC and Russia agreed in December 2016 to cut the oil output by about 1.8 million barrels per day (bpd) in order to rebalance the market.

That agreement is “still in place, and compliance has been very good,” said Slaughter. If that “holds good until the end of the year, then we are in a structurally more robust market of somewhere around the $60 range,” he added.

New sanctions against Iran, which is the third-largest producer in OPEC, are considered the most immediate threat to supply. Iran’s current oil production stands at 3.8 million bpd—up nearly 1 million barrels after sanctions were lifted in early 2016.

There is a risk of losing that additional supply out of Iran, according to analysts. However, it is hard to predict how much of the Iranian oil output is really at risk without knowing the details of the U.S. sanctions package, said Slaughter.

Venezuela is another risk to the oil market. The country’s oil production is crumbling due to the economic crisis, and new sanctions can further deteriorate its output.

Despite worries over Iranian and Venezuelan oil, there are many solutions for the global supply system to fill the gap and prevent any supply constraints.

Both Saudi Arabia and Russia have started discussing the possibility of unwinding the production cut agreement, which could ease prices. In addition, U.S. oil production is ramping up quite steadily.

It is normal to have short-term blips in oil prices, which are driven by fear rather than fundamentals, Slaughter said.

OPEC and non-OPEC ministers will meet on June 22 to make a final decision on easing supply curbs.

“They want stability in the market,” said Slaughter. And hence unwinding of the agreement will be a gradual move rather than a one-off, he added.

OPEC, led by Saudi Arabia, had largely dictated oil prices in the past. The rise of U.S. shale production, however, has changed the dynamics in the oil market in recent years.

The shale revolution that started with the development of new technologies in oil extraction has boosted U.S. oil production by 80 percent since 2012. U.S. production broke 10 million bpd for the first time in 48 years in November.

The increase in U.S. output caused a global supply glut, putting pressure on oil prices. Due to a sharp decline in prices between 2014 and 2017, about one-third of the shale companies went bankrupt or became financially distressed.

However, some shale producers remained resilient by bringing costs down to a sustainable level.

Today, current price levels averaging around $60 to $70 per barrel allow shale oil producers to reinvest in drilling wells and add capacity with free cash flow rather than debt, according to Slaughter.

A lot of these companies were highly leveraged in the pre-2014 oil price boom. With higher cash flow, these shale producers can now deleverage and have a healthier and more sustainable balance sheet.