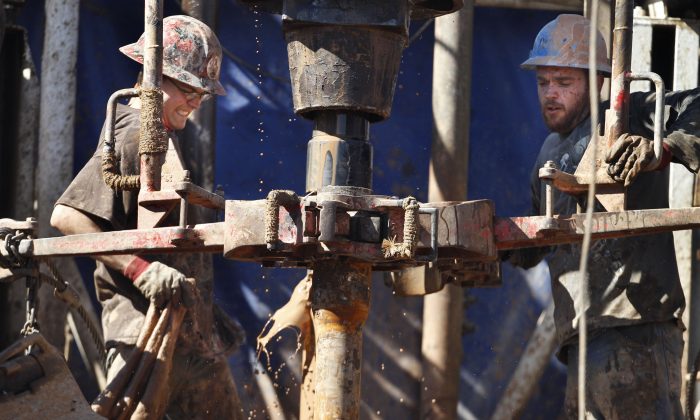 Oil field workers drill into the Gypsum Hills near Medicine Lodge, Kan., on Feb. 21, 2012. With OPEC unwilling to cut back on production, low oil prices seem almost guaranteed for at least the next few months. A boom in production from countries outside of OPEC, particularly the U.S., has filled storage tanks at the same time that economic growth has cooled or disappeared in most economies except the U.S. Analysts expect that imbalance in supply and demand to be corrected in the second half of 2016. (AP Photo/Orlin Wagner)
Business & Economy

Investors sold from the start of trading following a decision by OPEC last week not to cut production. Benchmark U.S. crude dropped nearly 6 percent, deepening its stunning 1½ year plunge, to close at its lowest level in nearly seven years. The losses were broad, with seven of the 10 industry sectors in the Standard & Poor’s 500 index closing lower.

As they have all year, oil drillers bore the brunt of the selling. Chevron and Exxon Mobil, both members of the 30-stock Dow Jones industrial average, each fell nearly 3 percent.

“There was a big hope that OPEC would announce a production cut, but it just didn’t happen,” said Mizuho Securities Chief Economist Steven Ricchiuto. He added: “The whole world is facing excess supply as the global economy slows.”

Airlines stocks were among the winners as investors anticipated bigger profits thanks to falling fuel costs. JetBlue Airways jumped $1.01, or 4 percent, to $26.49. Delta Air Lines also rose 4 percent, gaining $2 to close at $51.78.

In theory, lower oil prices should help many stocks because consumers often spend money elsewhere that they save at the pump or on heating bills. But investors have been disappointed.

“Retailers have been waiting for the pump-price dividend to filter into their stores, but for the most part we’re not seeing it,” said Jack Ablin, chief investment officer at BMO Private Bank.

Meanwhile, the shift in the U.S. to producing more oil has made the stock market more vulnerable to price swings in the commodity.

In each of the past three quarters, as oil prices have tanked, earnings per share for energy companies in the S&P 500 have dropped more than 50 percent, according to S&P Capital IQ, a financial data provider. After Monday’s drop, their stocks are down 22 percent since the start of the year.

Among other stocks making big moves: