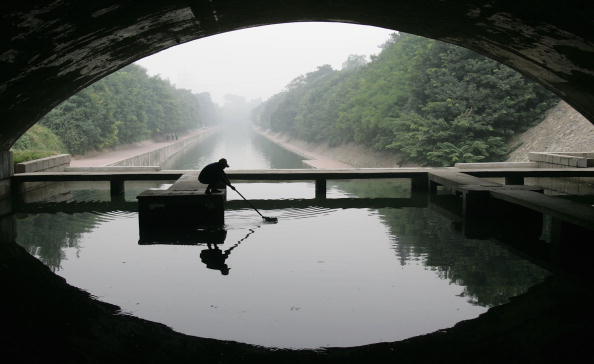 A worker gathers rubbish on the moat around the Old City Wall in Xian of Shaanxi Province, on August 23, 2006. (China Photos/Getty Images)
Social Issues

Oil Pollution Causes All Fish in Chinese Reservoir to Die

A couple in China saw the entire fish stock at their fish farm disappear after high volumes of oil waste leaked into the local reservoir, polluting the waters.

In 2015, Li Xiaoming, 55, and his wife, Liu Mingfeng, 53, returned to their hometown in Dingjunshan Township in northwestern China’s Shaanxi Province, after 19 years working out of town, according to a July 13 report by Huashang Daily, a local state-run newspaper.

On June 17, after the couple returned to their farm, Li discovered a pile of dead fish. He said he thought the fish had died due to the lack of oxygen in the water, and so he turned on oxygen pumps.

Li realized there was a thin layer of oil on the reservoir water surface, and that this had caused the death of his fish stock. He later came to the conclusion that heavy rain a few days earlier had elevated the water level of the reservoir, which caused the oil-contained mud nearby to be drawn into the water, allowing the oil to leach into the water.

“Very few people ever come here. In 2016, there was major rerouting construction work at the nearby national highway 108, and some oil waste was left behind,” said Liu.

Li added that there are no corporations operating near the reservoir, so it is unlikely that the waste is coming from private businesses.

The local water bureau in Mian County in Shaanxi took water samples from the oil-polluted reservoir to a private company for testing. The resulting report revealed that the water had oil pollutants of 28.6 milligrams per liter, which is 572 times higher than the allowed national standard of less than 0.05 milligrams per liter.

Li said he reached out to the company in charge of the construction project in 2016, but the company only agreed to pay him a few hundred thousand yuan (about $3,000)—not enough to cover his losses.

Companies in China can keep their manufacturing costs low because of their disregard for the environment. They can make products without worrying about proper waste disposal. Meanwhile, Chinese authorities often turn a blind eye to the environmental pollution that results.

In March 2015, farmers at multiple villages in Xinxiang City in northern China’s Henan Province spoke to the media about local hair wig factories that discharged untreated wastewater. As a result, their local water and soil sources are polluted and they do not dare to eat the rice they had grown, according to the state-run Dahe Daily. It turned out that these factories, in operation since 2009, never obtained approval from environmental regulators in the local government.