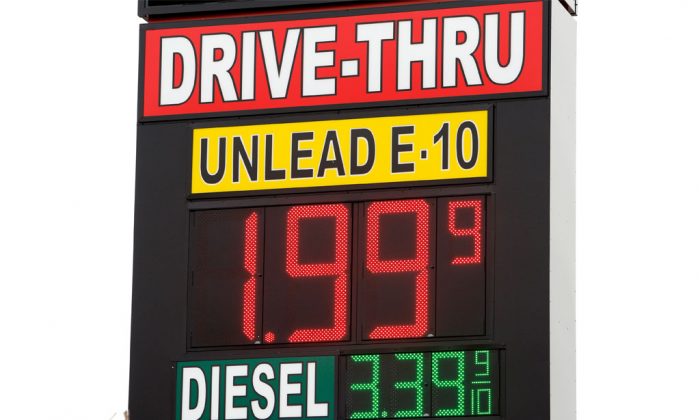 A sign displays the price for E-10 gasoline for $1.99 at the OnCue convenience store and gas station in Oklahoma City on Dec. 3, 2014. With oil prices now around a five-year low, budget officials in about a half-dozen states already have begun paring back projections for a continued gusher of revenues and more could be necessary if oil prices stay at lower levels. (AP Photo/The Oklahoman, Paul B. Southerland)
Business & Markets

A 6-month rout in the price of oil accelerated this week, culminating in a 4 percent drop Friday — its third such drop in 5 days — to its lowest level since May of 2009, when the U.S. was still in recession. Friday’s trigger was a lowered expectation for oil consumption from the International Energy Agency.

The agency said the reduction was a result of “the ever-more tentative pace of the global economic recovery.”

It was the latest in a string of reports and forecasts that suggest that there is far more oil being produced globally than there is demand for it.

OPEC said Wednesday that higher production from non-OPEC members and weak global economic growth will reduce demand for its oil to 28.9 million barrels a day next year. That’s the lowest level in more than a decade, and less than the 30 million barrels per day that the group says it plans to produce next year.

Earlier in the week Japan reported that its economy shrunk more than expected and new factory data from China suggested further slowing there.

On Friday the IEA said several years of high oil prices prompted drillers around the world to develop new oil fields. Now that oil is surpassing demand. For example, U.S production has surged by 3.5 million barrels per day since 2008 — more than every OPEC nation except Saudi Arabia.

The agency dampened expectations that the fall in oil prices will automatically be a boon for the global economy.

“The adverse impact of the oil price rout on oil-exporting economies looks likely to offset, if not exceed, the stimulus it could provide for oil-importing countries against a backdrop of weak economic growth and low inflation,” the IEA said.

It highlighted the impact on Russia, which has been particularly hard hit by the market sell-off.

Others, however, believe the benefit to consumers from lower fuel prices outweighs the negatives for energy producers. In a note last month, Barclay’s estimated that a 20 percent decline in gas prices in the U.S. results in $70 billion of savings for consumers, money that helps restaurants, clothing stores, movie theaters and other businesses that depend on discretionary spending.

Barclays said those gains more than offset an estimated reduction of $40 billion in capital spending by the energy sector.

The average price of gasoline in the U.S. has dropped 30 percent since April, to $2.60 per gallon from this year’s peak of $3.70, according to AAA, saving a typical household $100 a month.