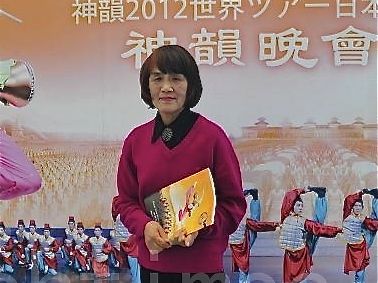 NAGOYA, Japan—On the afternoon of Friday, Feb. 17, Shen Yun Performing Arts New York Company held its first performance at the Nagoya Congress Center at Nagoya, a major city of central Japan. The two and half hour performance has brought hope in the New Year for the residents of Nagoya. After the show, ink painter Mrs. Sayoko Jyo ecstatically said that Shen Yun should be performed in China.

Mrs. Jyo has twice studied abroad in China, and has great interest in Chinese culture. After the performance, she couldn’t hold back her surprise and excitement, saying: “Today is absolutely fantastic. Performers descended down the backdrop, then appeared suddenly on stage in great numbers. This was absolutely beyond my imagination, splendid, and so exciting.”

She has a wish that such a brilliant show should be performed in China, which is the source of all divine culture, commenting that “what I want to say is that, such a magnificent show, should it be able to perform in China, it would be truly wonderful. People there would be very, very happy.”

As a painter puts a lot of emphasis on colors, Mrs. Jyo felt that the balance of brilliant colors in Shen Yun was outstanding. She marveled that the “coloring is truly beautiful. Because I paint myself, I look at the presentation with colors more closely. The coloring on stage is simply brilliant, simply so beautiful.”

Sayoko Jyo’s most memorable program was Lotus Leaves, deeply appreciating the overall colors and the dancing.