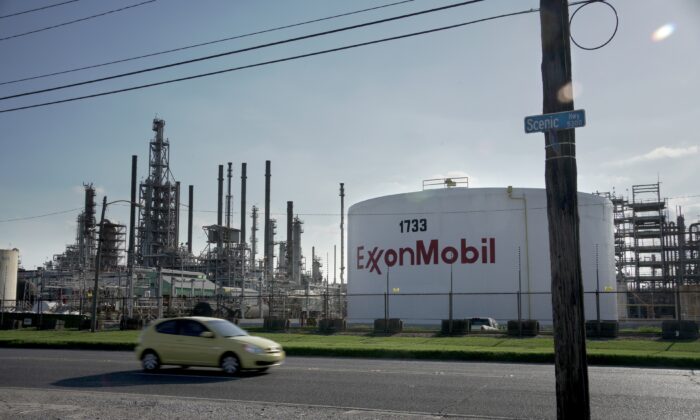 A view of the ExxonMobil Baton Rouge Refinery in Baton Rouge, La., on May 15, 2021. (Kathleen Flynn/Reuters)
US News

Oil Market Could Remain Tight for Next 5 Years: ExxonMobil CEO

ExxonMobil CEO Darren Woods does not see oil prices cooling down over the next few years, he said while speaking at the Bloomberg Qatar Economic Forum in Doha on Tuesday.

Woods said that it would take some time for the volatility in the energy market to end. He is expecting oil markets to remain tight for the next three to five years, Reuters reported. He also called on the U.S. government to bring a more efficient investment process while pointing out that ExxonMobil is one of the few companies in America that has been actively investing in the refining sector.

Back in 2017, the firm kicked off an aggressive investment program, Woods stated. “The investment plan that we laid out five years ago is the plan we are currently on and the pipeline of the projects that we have are continuing; they are very robust,” the ExxonMobil CEO said at the event.

Woods’s statement comes after ExxonMobil recently faced criticism from President Joe Biden, who accused the company of being too greedy amid rising oil prices and inflation.

Exxon made “more money than God this year,” the president said on June 10, Reuters reported. He went on to blame Exxon for making money by “not producing more oil” and asked the company to start investing and “paying your taxes.”

An Exxon spokesperson pushed back at Biden’s comments, pointing out that the company lost around $20 billion in 2020 and borrowed over $30 billion to finance operations. In addition, the firm has paid $40.6 billion in taxes in 2021, which is $17.8 billion more than it paid the previous year.

“In the short term, the U.S. government could enact measures often used in emergencies following hurricanes or other supply disruptions—such as waivers of Jones Act provisions and some fuel specifications to increase supplies,” the oil giant said in a June 15 news release.

As to longer-term measures, Exxon asked the Biden administration to promote investment in the sector through a “clear and consistent policy that supports U.S. resource development.”

This includes streamlined regulatory approval and support for infrastructure such as pipelines as well as regular and predictable lease sales. Biden has been under fire for canceling the construction of the Keystone XL pipeline immediately after taking office last year.

At the Doha event, Russel Hardy, CEO of oil trader Vitol, also said that the current oil supply shortage was the result of chronic underinvestment in the industry in recent years. This will underpin tight fundamentals for years to come, he said, according to S&P Global.

“The solution is more refineries, running more crudes, to produce more products,” he said. “The world can solve the problem but things are a little bit tight at the moment”