Oil Expert: Trump Seals His ‘Biggest and Most Complex Deal’ 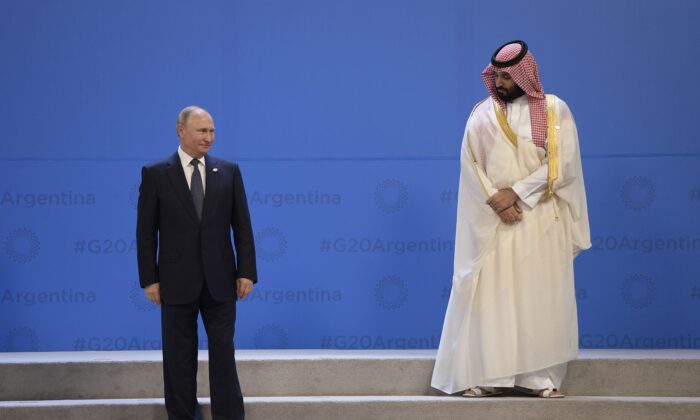 WASHINGTON—Oil-producing nations reached an agreement over the weekend to reduce output by a record amount, ending a weeks-long price war between Saudi Arabia and Russia that devastated oil markets.

President Donald Trump was personally involved as a mediator, playing a crucial role in sealing the deal, according to oil experts.

After four days of intense virtual meetings and negotiations, the group called OPEC-Plus—the Organization of the Petroleum Exporting Countries and others, including Russia—agreed to slash crude oil production by 9.7 million barrels per day (bpd) starting May 1, for an initial period of two months. It’s the single largest output cut in history, representing about 10 percent of global supply.

The agreement involves 23 countries committing to collectively withhold production. According to the deal, the adjustment will be 7.7 million bpd for the remaining six months of the year and go to 5.8 million bpd for 16 months after that.

Trump, who has repeatedly criticized OPEC for years, is the one who put it together, says Daniel Yergin, energy expert and vice chairman at IHS Markit.

“Of all the deals he’s done in his life, this has to be the biggest and most complex,” Yergin said in a note. “He had to be not only dealmaker but also divorce mediator, after the OPEC-Plus relationship split up six weeks ago.”

On March 8, Saudi Arabia initiated a price war with Russia after Moscow refused to support OPEC’s earlier call for deep cuts. After that, both sides threatened to flood global markets with cheap oil.

According to Yergin, the national security implications of the price war on the U.S. oil industry prompted Trump to step in.

Before the pandemic, the U.S. energy sector was already under significant financial distress as most shale oil producers are debt-ridden. The steep drop in oil prices hurt their cash flow and pushed them to the brink of bankruptcy.

West Texas Intermediate crude oil price was down by more than 60 percent since the beginning of the year.

As a result, many producers had to shut drilling sites and rigs, laying off tens of thousands of workers. In the week to April 9, the oil rig count, which is an early indicator of future output, was down 39 percent compared to the same period last year, according to Reuters.

The shale oil revolution, which refers to the combination of hydraulic fracturing and horizontal drilling, has made it commercially feasible for oil producers to recover more oil and gas. America’s energy independence is the result of the shale revolution. It enabled the United States to significantly boost its production over the past decade, making it the world’s largest oil and gas producer.

“President Trump worked to save the deal and now that it is done, U.S. oil producers may have a fighting chance to, at the very least, survive,” Phil Flynn, a senior energy analyst at Price Futures Group, said in a note.

“The cut should buy the market some time and reduce the chances that storage around the globe will overflow,” he added. “While many are dismissing this historic cut as too little too late, the reality is that it will provide the market some hope.”

After the announcement of the deal on April 12, Trump stated on Twitter that the price truce would “save hundreds of thousands of energy jobs in the United States.”

On April 13, he wrote on Twitter that the U.S. energy industry will recover “far faster than currently anticipated” with the oil production cuts and economic rebound post-coronavirus.

“Having been involved in the negotiations, to put it mildly, the number that OPEC+ is looking to cut is 20 million barrels a day, not the 10 million that is generally being reported,” he wrote.

According to estimates, the oil demand will decrease by around 20 million bpd due to the pandemic. OPEC officials have already indicated that the cuts could end up being much higher to balance the market.

The group of producers is mindful of the scale of the demand collapse and will likely match this with further supply cuts, according to an IHS Markit report.

OPEC-Plus nations decided to meet again on June 10 via videoconference, to determine if further action is needed.

Trump said that market forces naturally curbed output in the United States. According to IHS Markit, production cuts by OPEC-Plus, paired with the expected declines and shut-ins in the United States, Canada, and some other countries will likely remove up to 14 million bpd in May and June.