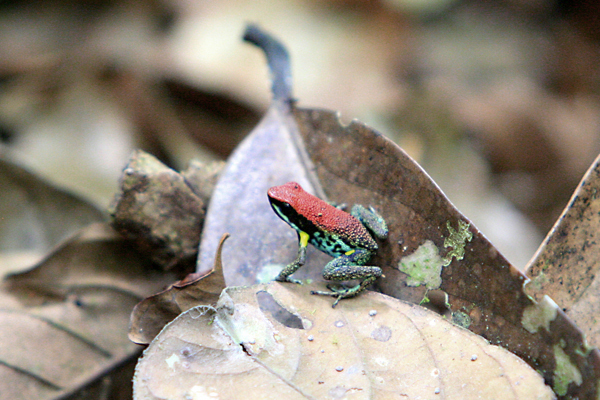 Poison dart frog in Yasuni National Park. Some scientists believe the park is in the epicenter of the most biodiverse region on the planet, yet Ecuador has been exploiting the park for oil for decades and will soon be moving into its most remote areas. Photo by: Jeremy Hance.
Environment

Hungry for oil revenue, governments and fossil fuel companies are moving even further into one of the world’s last great wildernesses, according to a new study in the open-access journal Environmental Research Letters. The total area set aside for oil and gas in the Western Amazon has grown by 150,000 square kilometers since 2008, now totaling more than 730,000 square kilometers—an area the size of Chile.

“The hydrocarbon frontier keeps pushing deeper into the Amazon,” said lead author Matt Finer of the Amazon Conservation Association. “There needs to be a strategic plan for how future development takes place in regards to roads.”

Oil and gas roads are considered major drivers of deforestation, especially in pristine places. Research has long shown that whenever an access road is built into the Amazon, destruction follows, including illegal logging, overhunting, slash-and-burn agriculture, and colonization.

“Furthermore, in the Amazon, oil and gas projects keep expanding into extremely remote locales, and so new access roads have the potential to open up some of the most intact remaining forests on Earth,” Finer told mongabay.com. “One of our key findings in the paper is that there are at least 35 hydrocarbon discoveries across the western Amazon that have not been developed yet, and this number will surely grow as exploration continues. If each one brings with it a new access road system, some of the last remaining Amazon wilderness areas could be in trouble.”

The research split the fossil fuel concessions into three areas: extraction, exploration, and promotion. Currently, extraction blocks only account for around seven percent of the total, meaning most of the oil blocs in the western Amazon—including Peru, Colombia, Ecuador, Bolivia, and western Brazil—are untapped.

Bolivia is behind almost half of the total expansion of oil and gas blocks in the region since 2008. In addition, Bolivia is one of two countries in the region—Ecuador as well—where fossil fuel extraction is allowed even in national parks.

“Bolivia has been aggressively creating new hydrocarbon concessions in its core Amazon area….They are currently finishing the drilling of an exploratory well (Lliquimuni) that could mark the first major hydrocarbon discovery in the Bolivian Amazon,” said Finer. “If so, that could be a big game changer in Bolivia, bringing major hydrocarbon development to the [Bolivian] Amazon for first time.”

In all, the study found documented 35 confirmed or suspected new oil and gas discoveries, especially in eastern Ecuador, northern Peru, and in the Brazilian state of Amazonas.

“Moreover, additional new discoveries are likely in coming years as all five countries aggressively promote increased exploration,” the researchers write in the paper.

However, according to their findings, the massive impacts of oil and gas production could be mitigated—if not wholly eliminated—if governments and companies started treating the Amazon like off-shore oil and gas in the oceans.

“This model treats the forest as an ocean where access roads are not a possibility and the drilling platform is essentially an island in the forest accessed only by helicopter and/or river transport,” said co-author and former U.S. Secretary of the Interior Bruce Babbitt, now a fellow with the Blue Moon Fund. “It essentially signifies roadless development.”

Instead of building access roads that soon attract colonizers—and destruction—the industry flies equipment and personal in-and-out via helicopter. This is a model already in use at a Camisea natural gas project in southern Peru as well as a number of other sites, according to the paper.

“These projects have complicated social issues with indigenous communities, but in terms of technical best practice, they are exemplary because all access is by air and/or water and the flowline routes are not used as roads,” the researchers write.

The scientists also argue that the offshore model is economically competitive with the more traditional road-access model, and may even prove cheaper.

“Analysis of a recent oil extraction project in northern Peru revealed that the use of technical best practice does not necessarily bring higher costs, and may actually reduce total expenses,” the researchers write. “The increase in helicopter-related expenses would be offset by eliminating the costly construction and maintenance of roads in a humid tropical forest environment.”

Still governments and companies appear less than convinced by the offshore access model. In 2007, Ecuador promised no road-building in its attempt to exploit Block 31 in Yasuni National Park, which some experts believe is the most biodiverse place in the world. However, satellite imagery last year revealed that Ecuador’s state company, Petroamazonas, had built a large road to the exploitation site, essentially turning a path for the pipeline into a fully servicable road.

“Ecuador changed course and built the road in 2012,” said Finer. “This case underscores that one of the most critical components to implementation of the offshore inland development model is ensuring that the flowline or pipeline corridor is not used as an access road. That is what is happening now in Block 31 and likely to be repeated in [Yasuni Naitonal Park’s ITT Block].”

Drilling in the ITT Block, (or Ishpingo-Tambococha-Tiputinin) is one of the most controversial fossil fuel projects in the world, after Ecuador said it would keep the block unexploited if the international community paid it half the revenue from the oil under the rainforest, or $3.6 billion. Ecuador dropped the plans in 2013 when it said money wasn’t coming in fast enough. It’s not clear yet what model—road-access or offshore—Ecuador will choose for the ITT Block, but it could have major ramifications for how much damage is done to one of the world’s most remote and untouched rainforests.

“This study documents numerous operational examples of the offshore inland model,” said Babbitt. “What we need now is government and company commitments to ensure all future hydrocarbon development follows this model and moves beyond building more access roads deeper into the Amazon.”

Of course, even roadless, offshore oil and gas projects do not put a stop to many of the issues of oil and gas extraction in the region. There remains the potential for conflict with locals and indigenous groups, pollution such as oil spills, as well as rising greenhouse gas emissions due to fossil fuel extraction. Some research has warned that global warming may dry out the Amazon, making it more prone to fires and even collapse.

Finer said the current plunge in oil prices may also play a role in how extraction proceeds in the region.

“For the 35 new discoveries…drop in oil price may impact whether companies decide if extraction is commercially viable or not.”