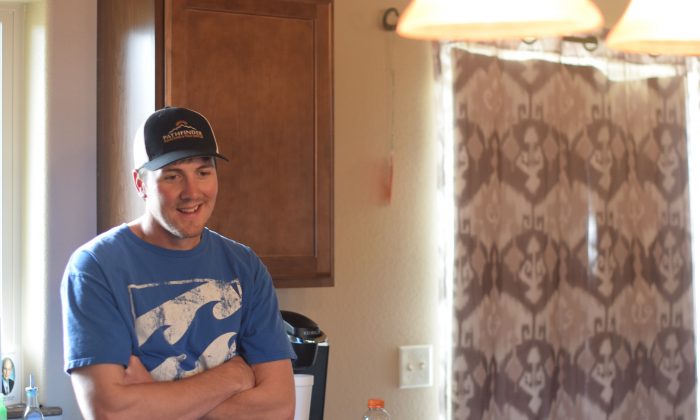 Ryan Lambert talks about working two-week rotations in the western North Dakota oil patch at his home in Spearfish, S.D, on Sept. 30, 2014. Lambert is among a growing number of oil patch workers who are choosing to live in the scenic Black Hills in South Dakota instead of the the hectic boomtowns in North Dakota. (AP Photo/Kevin Burbach)
US

SPEARFISH, S.D.—Ryan Lambert wants to reap the benefits of the booming Bakken oil region of western North Dakota — but he doesn’t want to live there.

“Do my time and get out, that’s about how I play it,” Lambert said, standing in the kitchen of his Spearfish home on one of his two-week breaks last month.

Lambert is one of a growing number of oil-field workers who make their living in the Bakken but live in the scenic Black Hills, one of the closest population centers to the oil patch that’s benefiting — directly and indirectly — from the highly lucrative boom.

Real estate agents say there’s a housing shortage in the region as workers and retirees buy up homes. Local officials say commercial and residential projects are on the rise. And businesses looking to cater to oil-patch companies are setting up shop in Spearfish and Belle Fourche, hoping to get the business without the headaches.

“You hate to … make your star brighter by making the other guy’s black, but in some sense, the disadvantages of the boom there have (contributed) to the opportunities down here,” said Doug Cole, who started Black Hills Fiberglass more than two years ago in Belle Fourche.

Cole, a retired legislator and construction worker, said it was a smart business decision to base his company that makes 400-gallon fiberglass oil and water tanks out of the Black Hills, which is about 300 miles from key oil cities in the region, namely Williston.

The lower costs of land, construction and materials are more enticing in South Dakota and Cole said he doesn’t have to worry about trying to compete with inflated oil field-wages offered by other companies in town.

Other companies, like Texas-based Permian Tank, have followed Cole’s lead and set up shop in Belle Fourche in the city’s industrial rail park, which they hope will attract businesses looking to service the surrounding oil region.

Sandy Donahue, a real estate agent who’s lived in the Black Hills for decades, said the influx of workers and retirees fleeing North Dakota’s oil boom has been great for business and market prices. Donahue said a two-bedroom home in Spearfish that would go for around $150,000 three years ago is now selling for more than $200,000. She said the city is seeing a shortage of homes under $300,000.

She estimated that 15 to 20 percent of her clients either work in North Dakota or are leaving it.

Lambert, who works around 90 hours a week in and around Killdeer, North Dakota, said he just wants to return to the peace and quiet of Spearfish after the chaos of the boom region.

“It’s bad enough being up there for two weeks, dealing with all the traffic and all the people,” he said.

Gallegos, who moved to the Black Hills three ago after working for BP in Wyoming, pulls seven-day stints in Williston while his wife and two kids live in Spearfish. He said he keeps his family away from the boom towns because of the people they can attract.

“In Spearfish … I know my family’s safe. But in Williston, you never know who your neighbor is.”