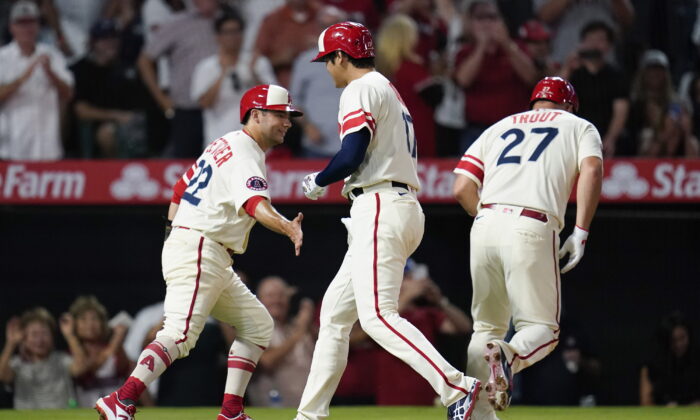 ANAHEIM—Shohei Ohtani became the first player in major league history to hit 30 home runs and record 10 pitching wins in the same season as the Los Angeles Angels rallied for a 3–2 victory over the New York Yankees on Aug. 31.

Ohtani’s three-run shot to center off a 97.9 mph fastball by Gerrit Cole (10–7) in the sixth put the Angels on top after they had been held to two hits the first five innings.

It was the third time in the past four games the reigning AL MVP went deep.

The Japanese two-way phenom went 5 for 11 with two homers and five RBIs in the three game series against the Yankees and AL MVP favorite Aaron Judge.

The New York slugger was hitless in two at-bats but drew two walks after going 4 for 7 with a pair of homers and four RBIs the first two games.

Patrick Sandoval (5–9) struck out seven and allowed two runs in seven innings to win for the second time in his last three starts.

Jimmy Herget, who got his fifth save, walked Judge and Giancarlo Stanton to lead off the ninth, but struck out Josh Donaldson and Gleyber Torres before Oswaldo Cabrera grounded out to shortstop Andrew Velazquez to end the game and give the Angels their fifth win in the last six games.

The Yankees entered August with the AL’s best record and an 11 1/2 game lead in the AL East, but went 10-18 during the month with minus-12 run differential.

New York has a six-game lead over Tampa Bay going into a three-game series with the Rays starting Friday.

Cole, who grew up in nearby Newport Beach, had a seven-game winning streak against his boyhood team snapped and lost for the first time in six career starts at Angel Stadium.

The right-hander was unable to overcome two Yankees’ errors in the sixth.

David Fletcher got aboard on an infield single and advanced to second when third baseman Josh Donaldson overthrew the bag at first. Mike Trout then reached when shortstop Isiah Kiner-Falefa booted a grounder.

Ohtani, who nearly connected for a two-run shot in the first inning before center fielder Aaron Hicks jumped up at the wall to snag it, got all of Cole’s pitch on a 2–0 count to clear the bases.

Ohtani, who is also the first Japanese-born player to hit at least 30 home runs in consecutive seasons, pumped his fist while rounding first base.

The Yankees had only one hit the first four innings before breaking through in the fifth.

Donaldson led off with a double down the left-field line after the ball caromed off the glove of third baseman Matt Duffy.

Donaldson advanced to third on a wild pitch and scored when Gleyber Torres lined a double into the right-field gap.

Yankees: RHP Jameson Taillon suffered a left forearm contusion after X-rays were negative for a fracture.

Taillon was hit on a line drive by Magneuris Sierra during the second inning of Tuesday’s game. It will be a couple more days before Taillon will know if he will have to miss a start.

1B Anthony Rizzo was not in the starting lineup as he continues to deal with back pain.

RHP Luis Severino (lat) will make a rehab start for Class A Tampa on Friday.

Angels: Continue their homestand with three games against Houston starting Friday. LHP Reid Detmers (5–4, 3.47 ERA) is 3–1 since the All-Star break.