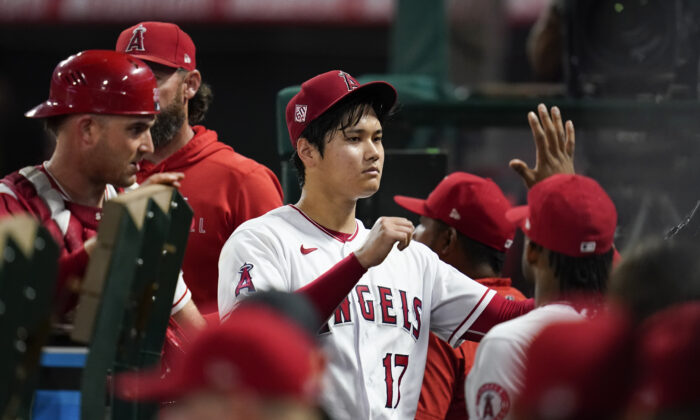 Los Angeles Angels starting pitcher Shohei Ohtani (17) returns to the dugout after pitching during the seventh inning of a baseball game against the Texas Rangers in Anaheim, Calif., on Sept. 3, 2021. (AP Photo/Ashley Landis)
Southern California

ANAHEIM, Calif.—Shohei Ohtani’s outing almost met an early end when he was struck by a comebacker in the first inning. Instead, he recovered and threw his most pitches since coming stateside in 2018.

The Japanese two-way star—who leads the majors with 42 homers—originally was supposed to start on Tuesday against the New York Yankees, but that was pushed back a couple of days after he was hit in the right hand by a pitch last Saturday against San Diego.

He was hit in the same hand on a sharp grounder by Nate Lowe on Friday, but he was able to shake it off after being looked at by the trainers and throwing a couple warmup pitches.

Ohtani went at least seven innings for the fifth time in 20 starts this season and lowered his ERA to 2.97. He reached at least 100 pitches for the fourth time in 32 big league starts. His previous high pitch count was 110 against Tampa Bay on May 20, 2018.

The last time Ohtani (9-1) threw at least 117 pitches was his last regular-season game in the Japanese League, when he had 124 for the Nippon Ham Fighters against Sapporo in October of 2017.

“I felt good for the most part,” Ohtani said through his interpreter. “I could have gone another inning longer if not for the two walks and a couple long at-bats.”

Ohtani is 8-0 in his last 13 starts and is the first Angels pitcher to win at least eight straight in a season since C.J. Wilson had a nine-game run in 2013. His only bad pitch came in the second inning, when Jason Martin drove a fastball over the wall in right-center on the first pitch of the at-bat for a tying two-run homer.

Texas had runners on second and third with one out in the fourth, but Ohtani struck out Martin and got Leody Taveras to ground out to first to end the inning. In the seventh, the Rangers had runners on first and second with two outs, but Isiah Kiner-Falefa’s grounder ended it.

“We pressured him the one inning, but he made some pretty good pitches,” Rangers manager Chris Woodward said. “He reached back when he needed to. He’s good, always composed and has amazing stuff.”

Ohtani—who is 6-0 in his last eight starts—allowed seven hits and walked two. He also had two pitches of 100 mph, marking the first time he had done that for the Angels since he had eight in his first start on April 4 against the Chicago White Sox.

“It was his best performance of the year,” manager Joe Maddon said. “He had great control and command. He attacked their hitters and was in the zone where he wanted to be. They did a good job of fouling stuff off. He should have been around 105 but that one at-bat (13 pitches to Jonah Heim in the fourth inning that ended with a fly out to right) pushed it up.”

Ohtani was hitless in four at-bats, although two of his outs were hit over 100 mph.

The Angels released José Iglesias before the game after he lost his starting job at shortstop a couple weeks ago. Iglesias was batting .259 with eight home runs and 41 RBIs in 114 games. Los Angeles selected the contract of right-hander Janson Junk to fill the roster spot.

The Angels jumped out to a 2-0 lead in the first inning on RBI singles by Phil Gosselin and Jared Walsh. A big key to the early lead was two stolen bases in the inning. Leadoff hitter David Fletcher stole third and scored on Gosselin’s single while Gosselin stole second and scored on Walsh’s base hit.

The game remained knotted until the sixth inning, when Jo Adell got aboard on an infield single with two outs, advanced to third on Brandon Marsh’s double and scored when Max Stassi hit a deep grounder to short off Dennis Santana (2-4). Kiner-Falefa tried to make a play at first, but the throw was wide and brought Lowe off the bag.

Steve Cishek worked the eighth and Raisel Iglesias the ninth for his 30th save in 35 opportunities.

Iglesias is the first Angels pitcher to reach 30 saves in a season since Huston Street had 40 in 2015.