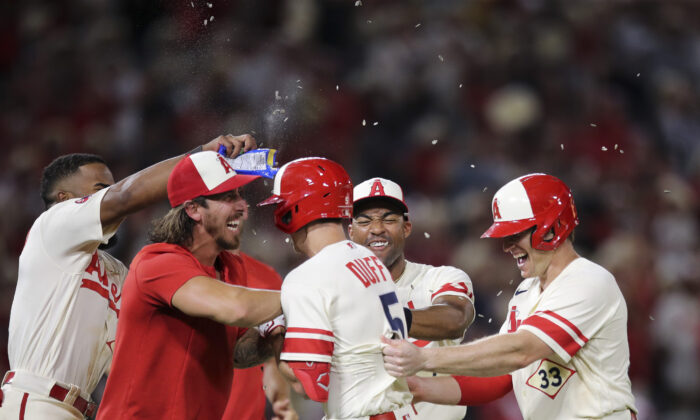 The Los Angeles Angels celebrate a hit by Matt Duffy (5) to bring in a run by Taylor Ward (3) and win the game in the twelfth inning against the Houston Astros at Angel Stadium of Anaheim, in Anaheim, Calif., on Sept. 3, 2022. (Meg Oliphant/Getty Images)
Baseball

ANAHEIM, Calif.—Matt Duffy’s bloop single in the 12th inning drove in Taylor Ward with the winning run Saturday night as the Los Angeles Angels rallied for a 2–1 victory over the Houston Astros.

The Angels came through on a night Shohei Ohtani reached 400 major league strikeouts but did not factor in the decision.

With Ward as the automatic runner in the 12th, Max Stassi drew a walk from Will Smith with two outs. Seth Martinez (0–2) came on and Astros center fielder Mauricio Dubon appeared to make a diving catch on Duffy’s ball, but first-base umpire Jordan Baker said Dubon didn’t come up with it in time.

Instant replay upheld the call as the ball hit the ground before Dubon was able to get his glove on it.

Ryan Tepera (3–2) pitched a scoreless inning to pick up the win.

Ohtani threw a a season-high 111 pitches over eight innings, allowing six hits and striking out five. It was the fourth time in the majors—and second this year—he has gone eight innings.

Ohtani and Houston’s Luis Garcia were locked in an entertaining pitchers duel as each just allowed one run. Garcia went seven innings, struck out seven and gave up only three hits with two walks.

Through 23 starts this year, Ohtani has 181 strikeouts, which is eighth in the majors, and his 2.58 ERA is ninth.

The list includes Dwight Gooden, Hideo Nomo, San Diego’s Yu Darvish, Cleveland’s Shane Bieber and Noah Syndergaard, who began the year with the Angels before being traded to Philadelphia.

It is the third time this season the Angels won when being held to four or fewer hits.

Ohtani retired the first 10 Astros’ hitters before Yuli Gurriel beat the shift and lined a base hit into right field in the fourth inning.

The Angels quickly got out of the inning though when Alex Bregman ground into a double play.

Houston was able to scratch across a run in the fifth. Trey Mancini hit a line-drive double to the wall in right-center and J.J. Matijevic followed with an RBI single into the left-field gap.

The Astros had the bases loaded with two outs in the sixth, but Christian Vázquez popped out to right fielder Taylor Ward to end the inning.

The Angels were held to two hits through six innings before evening it in the seventh. Luis Rengifo had a leadoff hit to right field and advanced to second on Ward’s walk.

Astros: DH Yordan Alvarez missed his fifth straight game due to hand soreness. He hit from the batting cages before Saturday’s game and may be back in the lineup on Sunday.

INF/OF Aledmys Díaz (left groin discomfort) is scheduled to begin a rehab assignment with Triple A Sugar Land on Thursday.

RHP Ryan Pressly (neck spasms) threw a 26-pitch bullpen session before the game and could be activated by Tuesday.

Angels: RHP Michael Lorenzen (right shoulder strain) did well in Friday’s rehab start with Class A Inland Empire and will come off the 60-day injured list within the next 5-7 days.