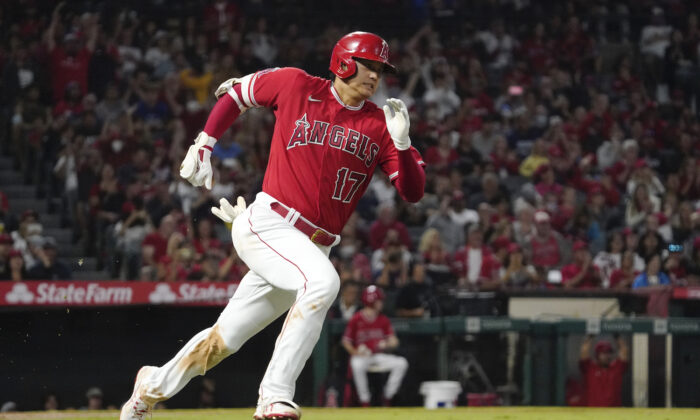 Los Angeles Angels designated hitter Shohei Ohtani rounds first on his way to a triple during the third inning of a baseball game against the Seattle Mariners in Anaheim, Calif., on Sept. 25, 2021. (AP Photo/Mark J. Terrill)
Southern California

Jhonathan Diaz pitched seven strong innings in relief and the Angels scored eight runs in the third as Seattle dropped three games out in the AL wild-card chase with seven to play.

Boston and New York are tied atop the wild-card standings, with Toronto two games back in the race for two spots.

Ohtani scored two runs and had three RBIs to raise his season total to 98. He tripled twice off starter Tyler Anderson, then was walked in his next two plate appearances. The two-way star has walked 13 times in the last four games, tying a major league record. The others who drew 13 free passes in a four-game span were Babe Ruth (1930), Bryce Harper (2016) and Yasmani Grandal (2021).

Peter Bourjos was the last Angels player to hit consecutive triples on April 26, 2011, against Oakland.

Diaz (1-0) allowed just three hits and one earned run to get his first major league win. He threw 99 pitches.

“He came in and defined that game,” Angels manager Joe Maddon said. “Give Diaz a lot of credit. He saved the bullpen the last several games. He pitched well. The last time he pitched, got off to a bad start. (Saturday) he settled in and kept making pitches all night long.”

Jared Walsh was 4 for 5 with four RBIs for the Angels, and Brandon Marsh scored four times. Luis Rengifo hit a solo homer in the second inning.

Anderson (7-10), acquired by the Mariners from Pittsburgh in July, had a rough start. He allowed nine earned runs on nine hits in two-plus innings.

“It seemed like every time I made a pitch, they hit it,” Anderson said.

Marsh, who batted leadoff, got on base in his first four plate appearances. Ohtani batted second.

“It’s fun seeing him getting pitched in the zone and getting walked, not intentionally walked,” Marsh said. “I can’t take any credit. I’m just up there trying to pass the baton, and Shohei Ohtani definitely did his part.”

Angels star Mike Trout knows a thing or two about being intentionally walked, and he’s given Ohtani some advice about it.

“He’s getting the treatment. I told him to be patient,” Trout said before the game. “Obviously, he’s being patient because he’s getting walked — but don’t let it get to you. Don’t change your approach. We’re playing a team tonight that’s in the race. They’re trying to win. They’re not going to give him anything to hit. They’re going to try to pitch around him.”

Up next for the Angels, Ohtani (9-2, 3.28) seeks his 10th win in his final home start of the season. He will bat as well. He could pitch one more time after Sunday, which would be in Seattle.