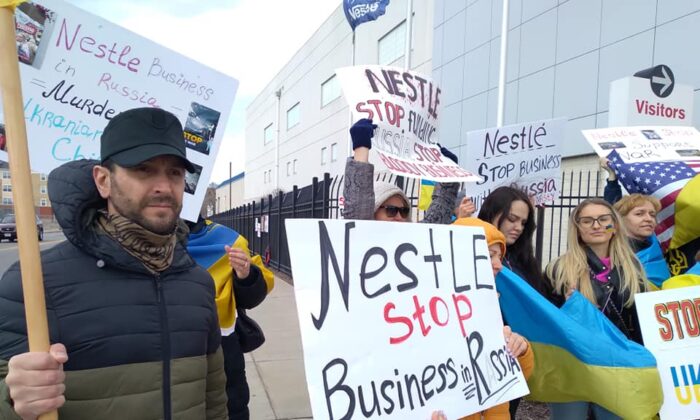 The large Ukrainian community in Ohio is protesting against Nestle continuing to do business in Russia. It is urging a boycott of the global food and candy manufacturer. About 30 people including Zenon Chaikovsky (L) protested in front of the Nestle plant in west Cleveland on April 7. (Michael Sakal/The Epoch Times)
US

The resolve of the Ukrainian community in northeast Ohio is growing and is now calling for a boycott against Nestle, which continues to do business in Russia selling essential foods there.

On its website, Nestle says it is not making a profit from the foodstuffs that include baby food and medical-related nutritional food.

About 30 members of the Ukrainian community, including several from the Cleveland Maidan Association, picketed in front of the Nestle’s Plant and offices on the west side of Cleveland on April 7.

Ukrainians are calling on European nations to unite and push for Russia’s President Vladimir Putin’s demise because they see him as the modern-day Adolf Hitler and believe he won’t stop his military aggression at just Ukraine, which he invaded on Feb. 24.

The protest comes amid numerous prayer services, Stand With Ukraine rallies, fundraisers, and benefits, as well as musical concerts with 100 percent of the proceeds going toward supporting Ukraine.

Holding signs that said, “Nestle Stop helping Putin,” “We Stand With Ukraine,” and “Stop Bloody Business,” the protesters urged people to stop buying Nestle’s products. They contend the taxes Nestle paid have been helping fund Russia’s war machine and paying for the killing of innocent people.

Many of the people participating in the protest were from Lviv, a city in western Ukraine about 43 miles from the Poland border.

Lviv has a population of more than 721,000 and is one of the many cities that have been hit by Russian rockets.

In fact, Lviv sounded a two-hour alarm on April 7 because of the threat of Russian attacks on the city that day, according to a protester who is from there.

On one of the signs were photographs of areas of bombed buildings, including the maternity ward of a hospital in Mariupol.

In the picture outside the ruined hospital was a pregnant woman lying on a stretcher. She later died.

“We are asking the community to boycott Nestle,” Helen Galyna of Cleveland told The Epoch Times.

For the past two years, she has been the president of the Cleveland Maidan Association which has supported Ukraine since 2014.

The nonprofit organization currently is accepting donations for medical supplies to be sent to Ukraine’s emergency first responders.

Galyna is from Kyiv, Ukraine. Her sister and mother still live in the area and her husband’s family lives in Ukraine.

“Places in the United States that continue to do business with Russia are helping them fund their war against Ukraine,” Galyna added.

“They are killing innocent children and people. I am worried for my family. I have friends leaving there every day. I worry what will happen.”

The company reportedly continues to employ workers in Russia and had reportedly paid the communist country $500 million a year in taxes, according to information obtained by Ukraine’s government.

In addition to its chocolate, candy, and cookie products, Nestle is also part of Stouffer’s Foods and Minor’s brand that makes flavor bases or broths.

A household-name company, Nestle is headquartered in Arlington, Virginia. In addition to its facility in west Cleveland’s Tremont neighborhood, Nestle also has a research facility in Solon, an east Cleveland suburb.

Knowing the situation is dire in his homeland, Volodymyr Tchepak of Lviv came to the United States for one thing—to dedicate his time to fundraising and seeking donations for Ukraine.

At age 62, he was too old to stay and fight with the military as they don’t want anyone over the age of 60, Tchepak told The Epoch Times.

The translation of his name Volofymyr means peace and love, he said.

To get out of the country, Tchepak rode a bus into Poland. He said it took the bus driver five hours to go 100 miles.

Tchepak arrived in Cleveland on April 2. He chose the city because of the large Ukrainian community there. He plans to return to Ukraine in July.

“The West and European countries are not doing enough to stop Putin,” Tchepak told The Epoch Times. “They’re all afraid of him—they’re chickens. Businesses in the United States need to stop doing work in Russia.

“Everyone was afraid of Hitler, but let him do what he wanted because they didn’t think he’d take much,” Tchepak added. “Look at what he did. Putin has to be stopped.”

In its most current statement issued on March 23, Nestle said this on its website:

“As the war rages in Ukraine, our activities in Russia will focus on providing essential food, such as infant food and medical and hospital nutrition—not on making a profit. This approach is in line with our purpose and values. It upholds the principle of ensuring the basic right to food.

“Going forward, we are suspending renowned Nestle brands such as KitKat and Nesquik, among others. We have already halted non-essential imports and exports into and out of Russia, stopped all advertising, and suspended all capital investment in the country.

“Of course, we are fully complying with all international sanctions on Russia.

“While we do not expect to make a profit in the country or pay any related taxes for the foreseeable future in Russia, any profit will be donated to humanitarian relief organizations.

Nestle also said the company has donated hundreds of tons of food and supplies, as well as significant financial assistance, to the people of Ukraine and refugees in neighboring countries.

“These efforts will continue,” the statement read. “We stand with the people of Ukraine and our 5,800 employees there.”

Zenon Chaikovsky of Lakewood, a west Cleveland suburb, said he was in Ukraine for a few months last year and was there for the 30th anniversary of its independence on Aug. 24.

He is from Lviv and is appalled at the thought that 86 percent of Russians support aggression in Europe, according to online foreign surveys. Because of Putin’s propaganda, Chaikovsky said the Russian people don’t have any idea what’s really going on.

“This is a real threat,” said Chaikovsky, who is a property manager. “These sanctions against Russia aren’t working. They should’ve been sanctioned a year ago when they started their military buildup along Ukraine’s border.”

He is also a musician (a percussionist) and sang at a Ukrainian benefit concert on April 8 at the Cleveland Museum of Art’s Gartner Auditorium.

Most of Chaikovsky’s family has moved to Poland, and he said he has friends leaving Ukraine every day.

“The message to Nestle here is to stop doing business in Russia,” Chaikovsky added. “That money is buying weapons that are killing Ukrainians. It’s helping fund Russia’s aggression. We need to help stifle Russia’s tax revenue that is paying for tanks and missiles.”

“We need to push for state legislation that would provide laws to sanction businesses that continue to do business with Russia,” Chaikovsky added.

Philosophizing, Chaikovsky said, “Do you know what would end this once and for all?

“Vladimir Putin needs to be destroyed, and a team of countries need to demilitarize Russia like Germany was after World War II. If Russia wants to build its economy fine, but not its military. History has a way of repeating itself. The Russians will leave Ukraine, but they’ll come back.”

If anyone is interested in making donations to help purchase medical supplies for Ukraine’s first responders, the nonprofit organization can be reached at (216) 600-1045 or by email: info@clevelandmaidan.org. Maidan’s website is www.clevelandmaidan.info.

At noon on April 16, in Port Clinton, Ohio, along Lake Erie in Ottawa County, there will be a Stand With Ukraine Event.

It will be held at the Grist Mill, 4 Monroe St., Port Clinton. There will be T-shirts available, raffles, a 50/50 raffle, live music, and food for purchase. Proceeds will benefit Blue/Yellow For Ukraine.