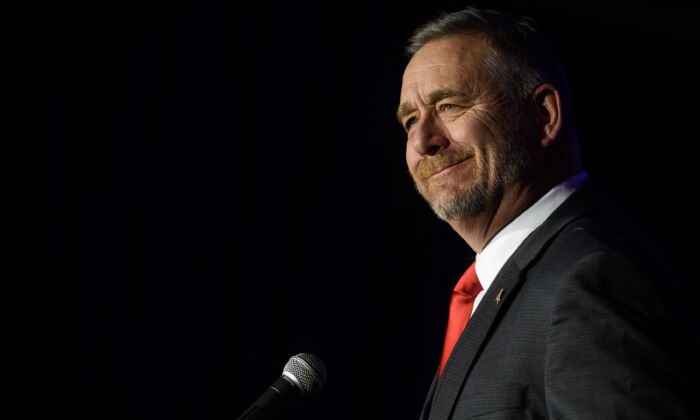 Hours after the Supreme Court voted to overturn Roe v. Wade, a federal judge ruled that abortions in Ohio are now illegal as soon as a fetal heartbeat can be detected.

Ohio Attorney General Dave Yost (R) filed a motion to eliminate the injunction against Ohio Senate Bill 23, commonly known as the “Heartbeat Bill,” less than an hour after the Supreme Court’s decision.

The legislation, which bans abortions after the first detectable fetal heartbeat, was signed into law by Republican Gov. Mike DeWine in April 2019 before it was blocked by a federal judge three months later.

The “Heartbeat Bill” prohibits abortions after fetal cardiac activity is detected, which is generally around six weeks into a pregnancy.

Under the law, patients will not be prosecuted, but providers could be charged with fifth-degree felonies and face up to one year in prison.

The law includes an exception to save the mother’s life but no provisions for rape or incest.

Before June 24, Ohio allowed abortions until after 22 weeks of pregnancy. Abortions were permitted after that point in specific cases, like when the mother’s life was in danger or her health was compromised.

The filing this morning was prompted by the Roe ruling, Yost said.

Under the 14th Amendment, the 1973 Roe v. Wade Supreme Court decision authorized the right to get an abortion, asserting that abortions were constitutionally protected until around 23 weeks when a fetus can live outside the womb.

The Supreme Court’s June 24 majority opinion derived from Dobbs v. Jackson Women’s Health Organization, which challenged the constitutionality of a Mississippi law passed in 2018 that banned abortion after the first 15 weeks of pregnancy.

“The law here satisfies the easy-to-meet standard for the same reason as the Mississippi law at issue in Dobbs: it rationally promotes the State’s legitimate interest in ‘protecting the life of the unborn,’” Yost’s motion read. “The ruling in Dobbs represents a substantial change in the law, and abrogates the prior legal basis supporting this Court’s Order enjoining enforcement of the challenged law.”

The state would be “irreparably harmed” by any delay in dissolving the Heartbeat Bill’s injunction, Yost argued.

“The heartbeat law has been sitting on the sidelines in federal court which could’ve saved countless lives over the past several years,” Ohio Right to Life President Mike Gonidakis said in a statement. “Starting right now no baby with a beating heart can be aborted in the state of Ohio.”

“One would think that the federal court would lift that stay, but there could be additional litigation as well,” DeWine told Cunningham. “Once that stay is lifted, it will be the health department’s responsibility to choose to follow up on that and we are prepared to do that.”

As protesters gathered in cities across the country after the Supreme Court ruling, DeWine called for civility.

“This dangerous and chilling decision can have devastating consequences in Ohio, forcing people to travel hundreds, sometimes thousands, of miles for care or remain pregnant,” Harvey said in a statement.

Because of the high court’s decision, six of Ohio’s abortion clinics could close if the state bans abortion.

“The most important thing that Ohioans need to know today is that abortion is still legal in Ohio,” Kellie Copeland, executive director of Pro-Choice Ohio, told reporters on June 24. “There are nine clinics across the state and several in neighboring states that can safely and legally provide abortion care for patients. Today’s ruling is devastating, but it is not the end.”

“That’s been the goal for years. It’s a good thing,” Huffman said.

“I think they’re all going to start running to the courts,” Huffman added. “Nothing is going to happen in California or New York.”

The week beginning June 27, Huffman said he plans to submit a proclamation with a co-sponsor proclaiming June 24 as “Life Day” in Ohio celebrating Roe v. Wade being overturned.

Huffman also told The Epoch Times that after Senate returns from its summer break in the fall, he expects that the Senate will pass the “Trigger Bill,” making abortion illegal in Ohio.

Currently, 13 states have the legislation in place, and it will take effect in a month, but Ohio did not, Huffman said.

The 13 states that have the Trigger Bill in place are Arkansas, Idaho, Kentucky, Louisiana, Mississippi, Missouri, North Dakota, Oklahoma, South Dakota, Tennessee, Texas, Wyoming, and Utah, according to the Guttmacher Institute Center for Reproductive Rights.

With Roe v. Wade’s reversal, two bills in the Ohio General Assembly would ban abortion if they are passed.

Ohio House Bill 598 would charge physicians with a fourth-degree felony if they perform medical or surgical abortions in Ohio. The proposed legislation does not include an exception for rape or incest. Doctors would be able to defend against the charges if the abortion was done to save the life of the mother, and specific steps were followed.

The Ohio House Government Oversight Committee has hosted three hearings on HB 598. It remains in committee.

SB 123, which has similar language to HB 598, saw two hearings last fall in the Senate Health Committee, where it remains.

Ohio House Bill 480, which would permit individuals to file civil suits against people who perform or help a woman get an abortion, has languished in the Families, Aging, and Human Services Committee since November 2021.

“As Americans, we know people should have the fundamental freedom to make decisions about their bodies and health care,” Ohio House Minority Leader Allison Russo, a Democrat, told reporters.

Lawmakers in the Republican-majority Ohio General Assembly are expected to pass a full ban on abortion later this year. They are on break until September.

Michael Sakal contributed to this report.