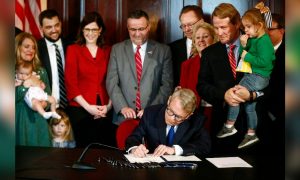 File photo of a police car. (Diego Parra/Pixabay)
US News

Ohio Woman Accidentally Shoots Daughter After She Surprises Her at Home, Reports Say

An Ohio prosecutor will not charge a mother who shot her daughter when she tried to surprise her.

Hannah Jones, 18, of Girard, said that she was shot in the arm last week by her mother, Renee Jones, after she apparently mistook her for an intruder.

“As I ran through the door she was in fear for her life and shot me,” Jones said, reported the New York Post.

The decision not to charge Jones with assault was based on evidence, Girard City Prosecutor Michael Scala said, WKBN reported. He said that her daughter’s surprise visit, the time of night, and the fact that the mother lived by herself were factors in the decision.

“The key question would be if the mother was negligent in not identifying her daughter before shooting,” Scala said, according to the report.

He said that the Castle Doctrine, which allows a person to protect their home, also factored into his decision.

“However, I do not intend this finding to be any acceptance of this action,” Scala said, according to the local news outlet. “The owning and firing of any gun at another should only be done with extreme caution.”

The Post reported that Renee Jones had a concealed carry permit.

Elaborating further, Hannah Jones said that when she was shot, “I crouched down and let out two screams.” Her boyfriend heard the commotion and called 911.

The boyfriend told a dispatcher that she was bleeding “pretty bad,” 21 News reported.

“My girlfriend just came home from college and her mom didn’t know, like honestly — she accidentally shot her,” he said.

According to the Post, Jones said her right elbow was broken in several spots.

“It truly has been a crazy few days, but I am beyond thankful to still be here on this earth today,” Jones said. “I sure am lucky to still be here! It still baffles my mind to know that I could be dead, but thankfully I had an angel looking over me that night.”

Girard Police Chief John Norman added of the case: “If you realize someone has a gun for protection, and they’re not expecting you—announce yourself when you enter the home, or even if you’re getting up to get a drink of water in the middle of the night.”

Other details about the case were not revealed.