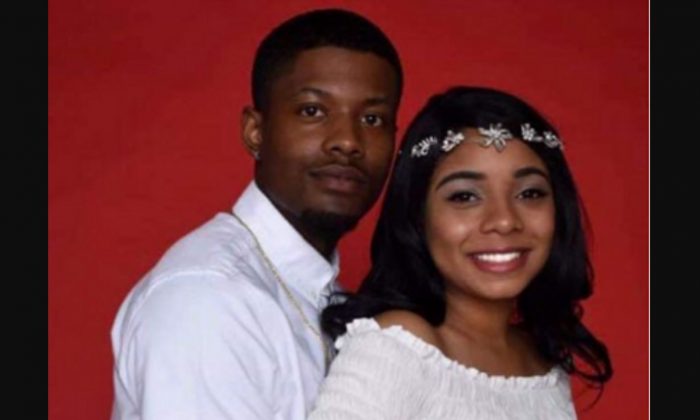 An Ohio State University student who authorities said was abducted at gunpoint was shot dead by police officers as her alleged abductor tried to flee from the police in Kentucky.

The university’s Department of Public Safety said that Skyler Williams, 20, was taken by Ty’rell Pounds, 24, on Feb. 11.

A witness called 911, telling the dispatcher: “Someone just kidnapped a girl on campus with a gun!”

Based on a tip from another caller who said they saw a distressed woman being forced into a vehicle by a man, police officers rushed to Interstate 71 southbound in Henry County, Kentucky. They tried to stop the vehicle in a traffic stop but the vehicle sped through without stopping.

The pursuit went into neighboring Oldham County with Pounds “continuing to evade and failing to stop,” the Kentucky State Police stated. “Responding troopers attempted to use stop sticks at approximately the 22-mile marker southbound. The stop sticks were unsuccessful due to the suspect evading their deployment.”

Finally, state police were able to force Pounds to exit the interstate, but he crossed a road and tried to re-enter the highway. Kentucky State Police troopers performed a maneuver to stop him and the vehicle came to rest on the ramp.

When a trooper attempted to approach the van to apprehend Pounds, he heard a gunshot. The trooper drew his weapon and fired. Pounds was hit and died at the scene but Williams was also struck by at least one round and was rushed to a nearby hospital, where she was pronounced dead.

This is the gas station Ty’rell Pounds and Skylar Williams stopped at before a multi-county chase Monday. A clerk here says Pounds prepaid $20 for gas he never pumped. As the two left, Williams mouthed “help me” to another customer. That customer called 911. @wave3news pic.twitter.com/lB8TAn1ZJz

Our deepest sympathies and condolences are with Skylar Williams’ family and friends. For those in need, support services are available.

The Kentucky State Police said that an investigation has been launched into the shooting.

“Our Ohio State community suffered a tragic loss with the death of Mansfield student Skylar Williams,” he said.

“This senseless and shocking incident has left our campus shaken. We join Mansfield Dean Norman Jones in expressing our condolences and deepest sympathies. Our thoughts and prayers are with Skylar’s family.”

According to police and court records, Pounds was Williams’s ex-boyfriend.

The former couple shared a child. Williams had a protection order against him, she told police after reporting that he pulled up behind her in a car while she was at a gas station on Jan. 3, reported the Louisville Courier-Journal.

After Pounds kidnapped Williams, he took her to his apartment, his roommate told officers. The roommate was showering when Pounds banged on the bathroom door, demanding his car keys and cellphone. When the roommate opened the door, Pounds had a gun in his hand and “was not himself,” seeming loud and agitated, the roommate said.

Williams was there crying but seemed unharmed, the roommate added.

“She dated him in high school, and I can remember students telling her then, ‘You should not be with him,’ and if only she listened,” Laurie Dean, a former teacher of Williams at Madison High School in Mansfield, told News 5.

She hopes the incident will prompt other girls to leave toxic relationships.

“Pay attention to warning signs, and if a guy is abusive at all, walk away,” she said.