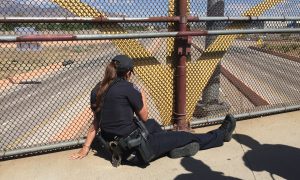 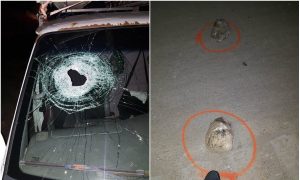 Man in Car Killed by Rock Thrown From Highway Overpass
0 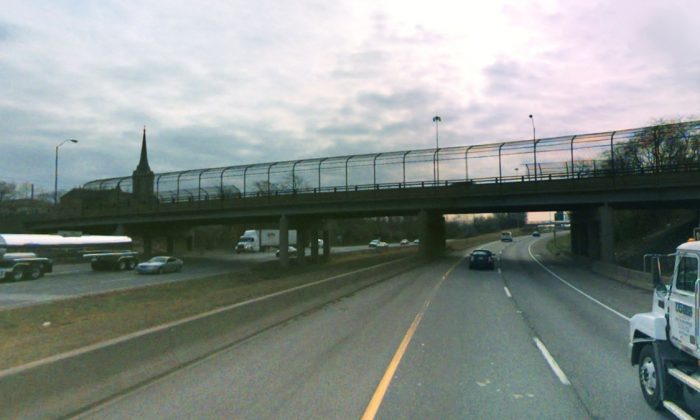 This overpass—Indiana Avenue over the southbound lane of I-75 in Toledo—was the site of a lethal assault. (Screenshot—Bing Maps)
Crime and Incidents

Four Ohio teenagers—three 14-year-olds, and one only 13—have been charged with murder after dropping a sandbag onto a car from an I-75 overpass on Dec. 19.

The teens were originally charged with felonious assault. When their victim died on Dec. 22, prosecutors upped the charges.

Along with the murder charges, the teens face charges of felony vehicular vandalism.

Apparently, they were dropping objects on passing cars just for fun. None of the boys seemed to realize the potentially disastrous consequences.

“It’s not fun and games. I mean, people are losing their lives,” Police Commissioner Bill Dwyer of Warren, Michigan told CBS. “And the consequences for these kids that think it’s fun and games and a prank, they’re gonna go to prison.”

According to police, the four teens had thrown various items off the overpass, local media reported. When the vehicle carrying 22-year-old Marquise Byrd passed underneath the Indiana Avenue overpass in Toledo at about 10 p.m. on Dec. 19, the teens dropped a sandbag.

The sandbag struck the passenger side of the windshield of the car, driving the composite-glass sheet into Byrd’s forehead.

“OK, you don’t know what hit him?” the operator asked.

“No, my windshield is, like, smashed up. … He is laid out on my seat. I think the windshield might have smacked his head,” the frantic driver replied.

Byrd was survived by a year-old son and a fiancée.

Tragically, similar acts led to the same result just two months ago in Vienna Township, about 80 miles north of Detroit, Michigan. Marquise Byrd, who lived in Warren, Michigan, had quite possibly heard about the incident.

In that incident, five teens were throwing rocks and other objects off an overpass over the same road, Interstate 75. They too struck a driver and killed him.

The driver they struck, 32-year-old Kenneth White of Mount Morris, Michigan, was on his way home to his four children on Oct. 18 when a rock crashed through his windshield and killed him.

“He was living his life. He wasn’t doing anything wrong. He was coming home to his family, and because of them, he didn’t make it home,” White’s sister-in-law Kristina Cagle told Fox 2.

“These kids … Couldn’t they just go skip rocks on the river or something instead of doing something so senseless? They took away somebody’s father, somebody’s son, and we’re never going to get that back,” Cagle continued. “Because of a joke. Because of some kind of prank gone wrong or whatever. It’s no laughing matter. Nobody’s laughing.”