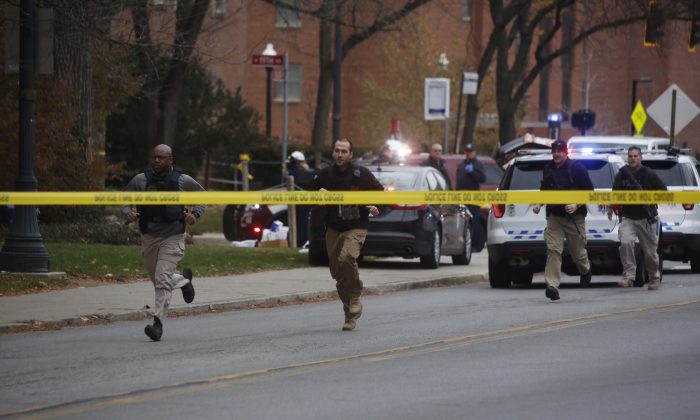 Police respond to reports of an attack on campus at Ohio State University in Columbus, OH., on Nov. 28, 2016. (Tom Dodge/The Columbus Dispatch via AP)
Crime and Incidents

COLUMBUS, Ohio—A spokesman for Ohio State University says a suspect in an attack on campus that injured at least eight people has been shot and killed.

Ben Johnson also said Monday that injuries in the attack included stab wounds and being struck by a vehicle.

A law enforcement official told The Associated Press that the suspect is believed to have initially struck people with a car before beginning to stab victims. There was no indication that the suspect shot anyone. The official wasn’t authorized to discuss an ongoing investigation by name and spoke on condition of anonymity.

The details started to emerge after a morning of confusion and conflicting reports that began with the university issuing tweets warning students that there was an “active shooter” on campus near the engineering building and that they should “run, hide, fight.”