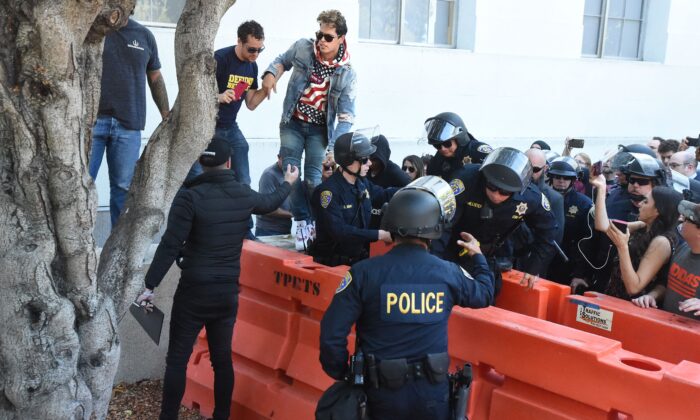 Conservative commentator Milo Yiannopoulos climbs over a barrier as he is escorted out of the University of California, Berkeley campus where he spoke to dozens of supporters on Sept. 24, 2017. (Josh Edelson/AFP via Getty Images)
By Matthew Vadum

“Under the guise of ‘speech codes’ and ‘safe spaces’ and ‘trigger warnings,’ these universities have tried to restrict free thought, impose total conformity, and shut down the voices of great young Americans like those here today,” he told a gathering of students at the White House.

The legislation came after institutions of higher learning across Ohio and the nation have banned conservative speakers or imposed what the speakers considered to be exorbitant fees to provide security for campus events.

Passed 33–0 on Jan. 28, Senate Bill 40, the proposed “Forming Open and Robust University Minds Act,” is currently working its way through the General Assembly, the other chamber in Ohio’s state legislature.

State Sen. Andrew O. Brenner, a Republican and a co-sponsor of the measure, told The Columbus Dispatch that the bill was inspired by events such as the violent demonstrations led by Antifa activists and left-wing students that took place when controversial conservative Milo Yiannopoulos unsuccessfully attempted to give a speech Feb. 1, 2017, at the University of California, Berkeley.

Rioters who demanded Yiannopoulos be silenced reportedly caused hundreds of thousands of dollars of damage to the campus and the surrounding city.

When he introduced the bill last year, Brenner said that “conservative ideologies … have been stifled by the administrations of colleges and universities due to bias, fear, or both.”

The bill would prevent state-funded entities from encouraging behavior that stifles constitutionally-protected speech. It would prohibit colleges from making “free speech zones” or designating “other outdoor areas of campuses where expressive activities are prohibited,” block colleges from forbidding “noncommercial expressive activity,” prevent colleges from interfering with petition circulation, literature distribution, and the display of signs, and forbid colleges from charging security fees “based on the content of their expression, the content of the expression of their invited guest, or the anticipated reaction to an invited guest’s expression.”

The bill would also eliminate a section of the Ohio code that permits universities to forbid communist or seditious groups from accessing school property.

“I’m not a fan of communism—I’m against them—and I’m not even a fan of socialism, but they have a right to free speech, and that shouldn’t be infringed,” Brenner said. “There is a First Amendment for a reason.”

In a statement provided to Campus Reform, James Smith, chairman of the Ohio State University Young Americans for Freedom (YAF), praised the legislation, which he said would “help to make college campuses more of a marketplace for ideas and less dominated by leftist groupthink.”

David Jackson of the Ohio Conference of the American Association of University Professors opposed the bill.

“There is a substantial difference between banning an idea and disallowing a controversial speaker that would cause massive disruption and create crowds that campus police could not control,” Jackson said in testimony presented to Ohio lawmakers last year.

“If legislation like this would be approved, thus taking these decisions out of the hands of the institutions, we would expect that the legislature would also provide funding to cover the costs of the crowds and necessary security that hosting controversial speakers would entail,” he said.