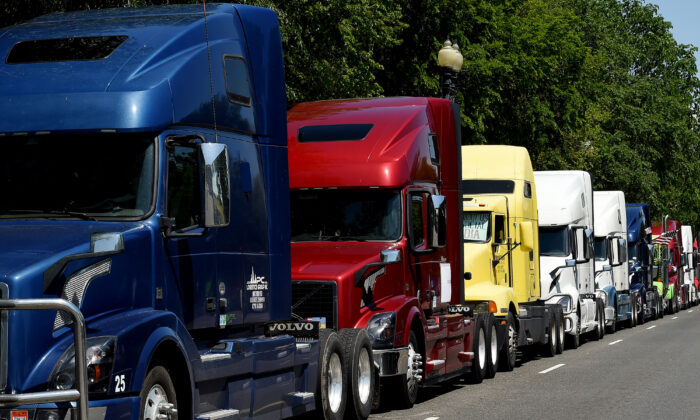 A trucker protest is seen in a file photo taken in Washington. (Olivier Douliery/AFP via Getty Images)
Regional News

Officials in Ohio said they are monitoring the possibility of a trucker protest against COVID-19 vaccine mandates that was reportedly scheduled for Monday.

Some social media posts said that truckers would protest against the Biden administration’s vaccine mandate on Monday. Several posts reportedly called for “slow rolls” or the complete blockage of highways over masking and vaccine mandates.

A spokeswoman for the Ohio State Highway Patrol said the law enforcement agency is aware of the possibility.

“The Patrol is aware and monitoring the situation closely to ensure roadways are safe to travel. For security reasons, we cannot go into further detail at this time,” spokeswoman Sgt. Christina Hayes told local affiliate FOX19 over the weekend.

And on Monday morning, the Ohio State Highway Patrol in Columbus is continuing “to monitor the situation closely and there are no known issues at this time,” said Lt. Nathan Dennis, a spokesman, according to Cincinnati.com.

The Cincinnati Police Department is also on alert, said Emily Szink, a spokeswoman for the department.

Hamilton County Prosecutor Joe Deters said that any trucker who partakes in the protest on Monday could face charges.

“To those who claim to be supportive of law enforcement—law enforcement is not with you,” he added. “This would pose a serious danger for our first responders and the community at large. I have always been supportive of a citizen’s First Amendment right to protest. But, this is not lawful and it is reckless. It will not be tolerated.”

Earlier this month, Biden announced that private businesses with 100 or more employees would have to either mandate that their workers get the vaccine or submit to regular weekly testing for COVID-19. The announcement drew significant criticism, and some GOP-led states threatened to file lawsuits.

The president also announced vaccine mandates for healthcare workers who work at facilities receiving Medicare or Medicaid funding. Across Ohio, public schools, universities, and hospitals have separately announced their own mandates.

Protests against vaccine passports have also erupted in New York City, one of the first cities to announce a pass system requiring customers and employees to show proof of vaccination to enter certain businesses.

Due to the pandemic and associated lockdowns, there have been reports of supply chain-related shortages across the U.S., even triggering panic-buying in some areas. Meanwhile, a nationwide trucker shortage has prompted some firms to look for more drivers abroad in recent months.