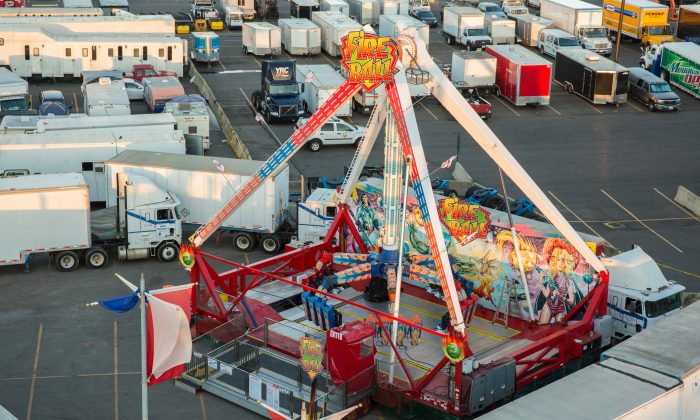 The Fireball ride is barricaded in by semi-trucks at the Ohio State Fair on Aug. 4, 2017 after a man died in the accident on the ride. (Benjamin Chasteen/The Epoch Times)
US

Ohio State Fair Accident: Cause of Ride Crash Is Revealed

The cause of the deadly Ohio State Fair ride crash in late July has been revealed.

One person—Tyler Jarrell, 18, a U.S. Marine recruit—died in the accident. Seven other people were injured when the Fireball ride’s gondola detached from the rest of the ride, Fox News reported.

The ride broke apart due to “excessive corrosion,” investigators concluded on Sunday, according to the Fox report.

The Fireball was built 18 years ago by Dutch manufacturer, KMG.

Product Manager Albert Kroon said that an investigation determined that the ride accident was caused by “excessive corrosion on the interior of the gondola support beam” that “dangerously reduced the beam’s wall thickness over the years.”

“This finally led to the catastrophic failure of the ride during operation,” Kroon noted.

The ride’s “passenger carrying gondola detached from the supporting sweep arm of the ride also known as a KMG Afterburner,” according to Kroon, in a letter dated Aug. 4, NBC4 in Ohio reported.