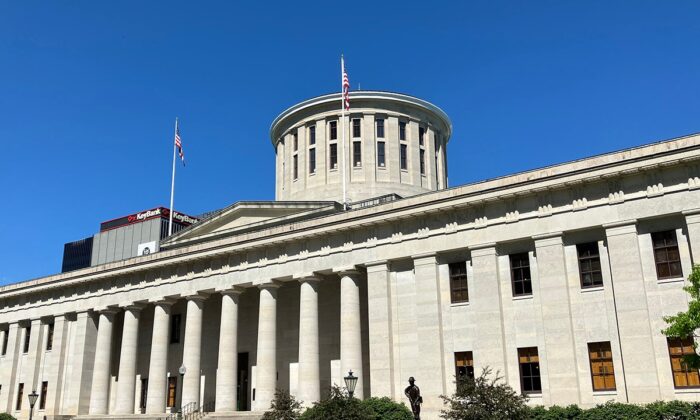 The Ohio House of Representatives passed a proposed transgender sports ban bill that would prohibit men and women from playing on sports teams other than their biological gender. The bill next will be reviewed by the state's Senate in the fall at the Ohio Statehouse in Columbus. (Photo courtesy of Ohio.Gov)
US Features

At first, a proposed bill that would’ve banned transgenders from playing on sports teams other than their biological gender in Ohio didn’t succeed.

Republican state Rep. Jena Powell is trying to get the measure enacted into law a second time.

Powell’s Save Women’s Sports Act was approved by the Ohio House by a vote of 56-28 on June 1 as part of House Bill 151. The legislation would prohibit biological males from competing in female-only sports within the state including in colleges and universities.

The Ohio bill next will be considered by the state Senate in the fall.

Democrats voted in opposition to Ohio’s HB 151, mostly because of the addition of the transgender sports ban to the legislation. As currently proposed, the bill also would provide mentoring and professional development for new teachers.

Powell, who represents all of Miami County and part of Darke County north of Dayton in the state’s 80th District, spoke about HB 151 on the House Floor when it was passed. She initially proposed the transgender sports ban in House Bill 61 that she sponsored last year.

However, Gov. Mike DeWine (R) eliminated the proposed ban on June 28, 2021, citing that government should not get involved in the transgender issue. The issue is better left to be dealt with on the local and state level by the organizations that oversee sports, DeWine said.

The transgender sports ban is not the first time Powell has had a difference of opinion with DeWine. When DeWine was enacting mask mandates and shutdowns during the pandemic, Powell opposed them. She contended the mandates were an infringement on the peoples’ constitutional rights, and that other states thrived without the mask mandates.

Powell believes that allowing men to play women’s sports is hurting their autonomy.

“The Save Women’s Sports Act is a fairness issue for women,” Powell said during her testimony. “Across our country, female athletes are currently losing championships, scholarship opportunities, medals, education and training opportunities, and more to discriminatory policies that allow biological males to compete in girls’ sports.”

“It’s time for the Senate to do the right thing—to protect the athletic opportunity for women and girls in the state of Ohio,” Powell said in a statement she provided to The Epoch Times.

Violators of Ohio HB 151 also could face legal action, according to the proposed bill.

Rep. Phil Robinson, a Democrat from northeast Ohio, voted against the measure. He also voted against HB 61 when the transgender sports ban was initially passed by the House.

Robinson wrote in a statement provided to The Epoch Times on June 8: “I’ve been asked by some, ‘how would you feel if your daughter had to compete against a transgender athlete?’ As a father, I tell them that I don’t worry about that. I worry about my daughter looking at me one day and saying, ‘how can you tolerate making anyone in this state feel like they aren’t included, less than others, or not allowed to participate in fair and friendly sportsmanship?’ … That is my real concern.”

Robinson also contended that HB 61 has not gone through the proper committee process with both proponent and opponent hearings and testimony, or a committee vote. He said imilar legislation in other states is being blocked by courts on grounds of violation of federal law and equal rights protections.

As of 2021, there have been no Ohio student complaints brought to the committee’s attention about a transgender athlete.

HB 151 next will be reviewed by the Senate likely in November, DeWine spokesperson Dan Tierney told The Epoch Times on June 7. The state Senate is on summer recess, and should return about the time of the Nov. 8 General Election, which is usually the process, Tierney said.

“This bill has yet to go through another chamber,” Tierney said. “We do not know what forms it will take. There are no guarantees it will pass, or if the governor will support it. It’s too early to comment on it. We will monitor this bill and see what is done with it. The governor respects the legislation.

“The important thing is, is that the bill is in the process,” Tierney added. “It will undergo more hearings and the public will speak out against it or in support of it to help the legislature decide what needs to be done with it.”

The amendment sponsored by Powell in HB 151 would override the OHSAA’s policy, Stried said.

The OHSAA’s Board of Directors voted to put its policy involving transgenders in place in 2017 and reviews the policy annually. Stried said he believed the transgender issue was “under the radar” five years ago, and the board’s decision to put a policy in place did not garner a lot of attention by the media then.

OHSAA opposed HB 151, according to a statement  Stried provided The Epoch Times.

“The OHSAA believes that our current transgender policy is effective in protecting the integrity of girls’ sports, while also providing participation opportunities for the highly vulnerable group of transgender students,” the statement said.

“Of note, there have only been a total of 13 transgender female athletes who have participated in OHSAA sports since the 2015-16 school year, and only three of those athletes have played girls’ sports at the high school level. The remaining athletes were in 7th or 8th grade.”

The OHSAA board of directors voted to put its policy involving transgenders in place in 2017 and reviews the policy annually. OHSAA allows transgender girls and boys to compete on teams that align with their gender if they meet certain physical criteria.

Stried said he believed the transgender issue was “under the radar” five years ago, and the board’s decision to put a policy in place did not garner a lot of attention from the media then.

Stried also told The Epoch Times that he wasn’t surprised the Save Women’s Sports Act returned to the House for reconsideration.

“Some people are going to continue to keep this issue on the front burner,” Stried said. “I figured it was only a matter of time before it returned for reconsideration.”

“I believe House Bill 151 is important and reasonable to protect girls’ and women’s sports as much as possible,” Broadbent said. “They should have their own sports playing arena and environment. It would be ridiculous if they didn’t.

“I really believe as public awareness on this issue continues, the pushback and dislike of these types of movements will grow,” Broadbent added.

“I truly believe that the majority of people believe that girls and women should have their own sports teams,” Broadbent said. “They should not be muddied by really big boys who say they feel like they’re a woman today.”