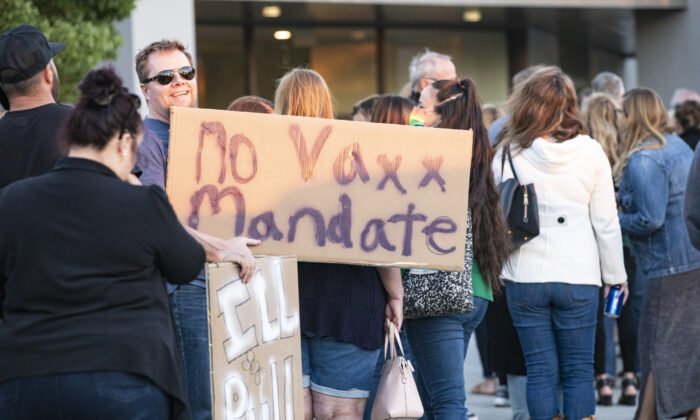 In this file photo, parents gather to express their concerns over vaccine mandates for students at the Placentia Yorba Linda Unified School District building in Placentia, Calif., on Oct. 12, 2021. (John Fredricks/The Epoch Times)
By Bill Pan

The Ohio School Boards Association (OSBA) board of trustees has voted to cut ties with the National School Board Association (NSBA) over the latter’s attempt to have federal agents police school board meetings across the country.

The letter in question (pdf), which was sent on Sept. 29, urged that federal law enforcement step in to handle “threats or actual acts of violence” against school leaders, alleging that “angry mobs” of parents who sought to express opposition to COVID-19 restrictions and the teaching of critical race theory have been “inciting chaos” during school board meetings.

“As these acts of malice, violence, and threats against public school officials have increased, the classification of these heinous actions could be the equivalent to a form of domestic terrorism and hate crime,” the NSBA argued in the letter, encouraging the federal government to invoke laws designed to counter terrorism, such as the PATRIOT Act, to address the alleged threats.

The Ohio school board group said they were not consulted by the national federation about the crafting of the letter, nor did they agree with the letter’s content.

“We were not informed of or asked for any input into the creation of the letter sent to the president,” Lewis said, adding that while it’s important to keep parental and community discussion at school board meetings free from violence and harassment, such interference should be dealt with at the local level, not by federal officials.

“We believe the letter from NSBA leadership demonstrated how out of touch the national association is with the concerns of local school boards and the principle of local control. Because of that, OSBA no longer sees the value of continued NSBA membership,” he said.

The announcement comes after the NSBA walked back its widely criticized message, saying that “there was no justification for some of the language included in the letter.”

The OSBA is the latest in a string of state school board organizations that have reevaluated or ended their membership in NSBA over the letter. According to statements collected by advocacy group Parents Defending Education, as of Oct. 21, 21 state chapters have distanced themselves from the national organization, with most of them clarifying that they were not consulted about the letter.