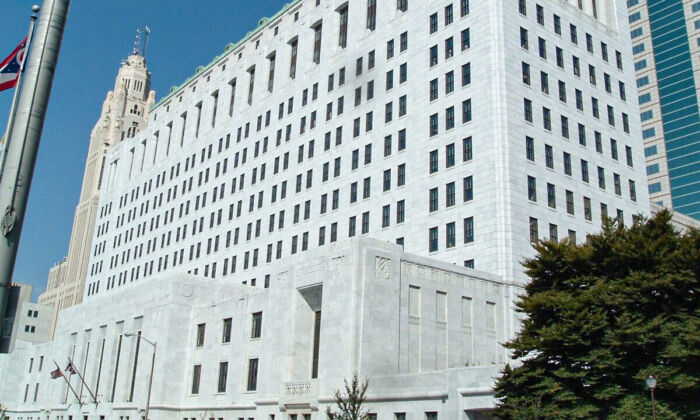 The Ohio Supreme Court ruled by a 4-3 vote on Jan. 12 to eliminate the congressional redistricting maps. (File photo)
US

Ohio’s legislators have requested that new district boundary maps not be drawn or implemented until after the Nov. 8 General Election.

The move comes as the second phase of Ohio’s primary election—that could be held as early as Aug. 2 for the State House and State Senate offices—is being planned.

Earlier in the week of May 9, attorneys representing Ohio House Speaker Bob Cupp and Senate President Matt Huffman requested that the Ohio Supreme Court, which has been reviewing and rejecting proposed redistricting maps, hold off on implementing the newly-drawn districts in hopes of eliminating confusion.

Such a move would allow the election to go forward without distractions.

If the state’s high court goes along with the legislators’ requests, it would mark the sixth time that the Ohio Redistricting Commission would have redrawn and submitted district maps.

The Ohio Supreme Court’s judges have been rejecting the maps by a 4-3 vote since September 2021, citing that the maps violate anti-gerrymandering laws and are in favor of Republicans.

Judge Maureen O’Connor, a Republican, has been casting the dissenting vote against the maps but will be retiring from the bench at the end of this because of age limits.

A number of the members of the Ohio Redistricting Commission are up for re-election, and the legislators believe it would be more favorable to wait until new members possibly are put in place on the commission.

Depending on what the state decides with the election, the U.S. District Court of Southern Ohio in Columbus still could weigh in to guide the implementation of a district map or setting an election date if the state legislature requests that.

As for the second primary election date, the Ohio Secretary of State’s Office and the Association of Elections Officials are lobbying to hold the elections for State House, State Senate, and State Central Committee on Aug. 2.

A second election date comes at a cost to Ohio taxpayers of about $30 million.

There are 15 districts for U.S. House representatives, 33 State Senate districts, and 99 State House districts, according to information from Cupp’s office.

There had been 16 districts for the U.S. House in Ohio, but one district was eliminated in the 2020 U.S. Census due to the state’s drop in population.

However, as what Secretary of State Frank LaRose has called a “stop-gap measure,” the high court is considering using a proposed district map that had been submitted in the third batch for the court’s review but was ultimately rejected. That map had previously been rejected in March but could be used for the second portion of the primary election.

However, as of May 11, no concrete date has been set, a worker at the Montgomery County Board of Elections in Dayton told The Epoch Times.

The sentiments of Paul Adams, director of the Lorain County Board of Elections, a politically active and spirited area in northeast Ohio west of Cleveland echoed the elections board.

Not knowing where a district’s boundaries are going to be situated not only affects a candidate’s campaign strategy, but not knowing the date of the election puts a strain on officials who are tasked with finding workers to staff the polling places.

In Lorain County alone, it takes about 1,000 poll workers to adequately staff the precincts, Adams told The Epoch Times.

A second primary election will cost Lorain County alone about $400,000, he said.

Adams has worked for the Lorain County Board of Elections since 2003 and has been its director since 2010.

“There’s a lot of things that are making this primary tough. Number 1, we don’t know what the boundaries will be in the redistricting map, or when that will be approved.

“Second … we’re still waiting on the final counts from absentee and provisional ballots from the May 3 primary, and having to prepare for the November election.”

“With an election being held in the summer, we’re looking at a very low voter turnout,” Adams added.

“Plus, there will be the challenge of getting enough poll workers to adequately cover the precincts. There have been district boundary disputes and election issues before, but nothing like this, or to the extent that it has caused the primary elections to be split up.

Using an example, Adams said that former State Rep. Dan Ramos (D), filed in February to run for office as a write-in candidate for District 53, covering Lorain and Amherst.

At the time Ramos filed, he was unopposed, or there was no incumbent in the seat.

Incumbent Joe Miller (D), who planned to run for re-election in Lorain and Amherst’s District 56, currently has been placed in District 53 under the proposed maps with Ramos.

Adams went on to say that the last time anything similar has happened with elections was about 30 years ago when the 1992 primary was moved from May to June because of a district boundary dispute, he said.

“To the best of my knowledge, that was the only time a primary election got moved, but I’ve never known one to be split up.”

“We’re hoping this all gets resolved and that after this primary everything will be on one ballot in November. We’ll just have to wait and see.”