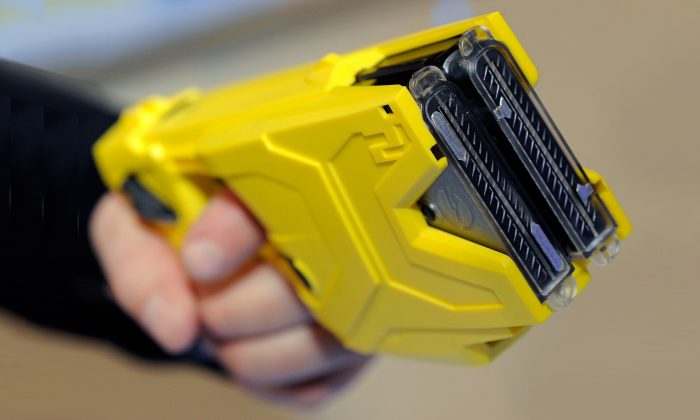 A two-shot Taser can strike multiple targets, as these officers learned the hard way. (Ethan Miller/Getty Images)
Crime and Incidents

A Riverside, Ohio, police officer accidentally electrocuted his partner when a taser barb he aimed at a suspect missed its target and struck the officer in the back.

Officer Nicholas Toscani and Darrin Anderson were conducting a routine traffic stop on Thanksgiving, Nov. 23, on Waneta Avenue in Riverside, Ohio, Thanksgiving Day, according to the Dayton Daily News.

The initial call went out at 1:16 p.m., saying that a man was assaulting a woman. In a police cam video, the two officers can be seen approaching a car containing the subjects of the call.

The officers asked that the man, who was in the passenger seat, provide ID. One officer said in the video, “We need your ID or you can be arrested for failure to identify yourself to a police officer.” The suspect does not comply.

One officer tells the suspect, “ID or no?” while the other adds, “All you have to do is comply, dude.” The female driver can be heard telling the man to “stop.”

When the passenger failed to comply, the officers ordered him to get out of the car. While the lady screamed at them, both officers then pulled the male passenger out of the car. The man tried to wrestle free, so Officer Anderson pulled his taser and fired at the suspect.

Anderson saw that his partner had been hit, but had no choice but to continue to discharge the taser until he could secure the suspect. Officer Anderson can be heard telling his partner, “Sorry, Nick,” to which his partner responds, “You’re alright.”

Here is the view from officer Anderson’s body cam.

While this encounter was playing out, other officers rolled up on the scene, helping the downed officer.

Officer Toscani was taken to Soin Medical Center for treatment.

The suspect, later identified later as 22-year-old Christopher K. McClinton, was taken to Montgomery County Jail. McClinton was detained on charges of obstructing official business, failure to disclose personal information, and resisting arrest. McClinton pleaded not guilty to the charges on Nov. 27.

What do you think of this whole affair? Share your comments below.