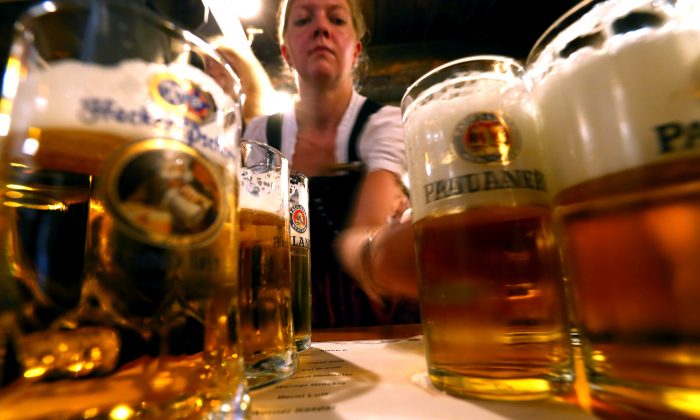 Glasses of Paulaner beer during a festival in Germany on Sept. 12, 2016. The Paulaner brewery was established by monks in the 17th century, who found a way of brewing beer with enough nutrients to sustain them through Lent without food. (Alexander Hassenstein/Getty Images)
US News

Inspired by super-strict brewer monks of the 17th century, an Ohio man has given up eating food for the 46 days of Lent and is planning on getting all the sustenance he needs from beer.

Just over a week into his “supersize me” experiment and Del Hall has already lost over 14 pounds, and claims to feel “amazing” on his liquid diet.

“Just like the monks used to do it back in the 1600s, I’m going to do the same thing,” Hall said in a YouTube video announcing the fast. “It’s not necessarily about the weight loss as it is the challenge of replicating what the monks did.”

Hall should know a thing or two about beer—he is director of sales at local brewery Fifty West Brewing in Cincinnati.

“I’m having anywhere from two to five beers a day,” he said on Day 7 of his experiment on YouTube, where he is documenting his experiences. “I’m not necessarily drinking in the morning, I’m not a breakfast person, so I get up, I have some water and I have a black coffee, no sweetener, no dairy in it, just black coffee.”

Hall said that he is taking a multivitamin every day in case his “liquid bread” is lacking something vital.

“I normally have my first beer sometime in the afternoon and then I might have one whenever I’m feeling a bit peckish,” he said.

Hall, an Army veteran, has done a four-day water fast before but said drinking only beer for several weeks could be a whole other challenge.

By day eight, he had lost 16.5 pounds, according to one of his posts on YouTube.

Hey! I’m on the news again talking about my 46-Day Beer Only Fast!!!

“I think we’ve gotten away from fasting and I think it’s just a big part of being human, and I just feel really good when I fast,” he said.

Back in 2011, a journalist lost 25 pounds in a similar experiment, inspired by stories of 17th-century monks, who knew all about brewing.

In the 1600s, a super-strict order of Catholic monks in Bavaria created a beer that was strong enough to sustain them through the 46 days of Lent without food.

A descendant of that beer is still brewed today by the Paulaner brewery that still carries the name of the order of monks that founded it.

“Being a strict order, they were not allowed to consume solid food during Lent,” spokesman for the Paulaner Brewery Martin Zuber explained, according to the Catholic News Agency.

They needed something other than water to sustain them, so the monks turned to a common staple of the time of their region—beer. They concocted an “unusually strong” brew, full of carbohydrates and nutrients, because “liquid bread wouldn’t break the fast,” Zuber said.

But Hall isn’t drinking Paulaner beer. He had one on Day 1 as a “homage” to the monks, but after that has been drinking a variety.

Hall is hoping that his experiment will not only prove the monks of the 17th century may have been on to something, but also will break his addiction to carbs and sugar and has poor eating habits.

Thanks to @700wlw, Eddie & Rocky, and @iheartradio for having me on air today!!! It was a blast!!! #craftbeer #beer #beerfast #lent #beergeek #instagram #instagood

“I hope when this is done … when I’m hungry and there’s bad food available, I opt to not eat anything at all,” Hall said.

He said he experienced intense hunger cravings on day three, but by the sixth day they had subsided, and he felt amazing.

One benefit that Hall has already noticed is that his sense of smell is improving—and that he has noticed something about the city air he never tuned into before.

“Our air in Cincinnati is permeated with the smell of Cincinnati chili. It’s delicious,” Hall said. “There are so many different parlors … I wonder if our sense of smell isn’t in tune to it because it’s everywhere.”