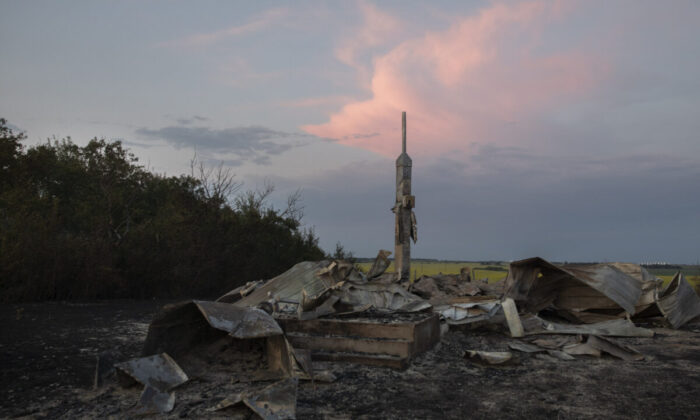 Ashes and debris are all that remain after what police called a "suspicious" fire at the Holy Trinity Roman Catholic Church near Orolow, Sask., on July 8, 2021. (The Canadian Press/Kayle Neis)
Canada

A resolution recently endorsed by the Ohio state legislature is urging the U.S. government to place Canada on a special watch list of countries for “violations of religious freedom.”

The Ohio House State and Local Government Committee voted 8-2 on May 18 to endorse House Resolution 194, urging action to address the “abuses of religious liberty” it says have been on the rise in Canada.

“We, the members of the House of Representatives of the 134th General Assembly of the State of Ohio, have taken note of the abuses of religious liberty that have gone on throughout the Provinces of Canada during the COVID-19 pandemic,” the resolution says.

It urged U.S. President Joe Biden and U.S. Congress, through the United States Commission on International Religious Freedom (USCIRF), “to take whatever action is necessary to address and rectify the situation,” and “consider adding Canada to the Special Watch List.”

The watch list is a record maintained by USCIRF of countries where the government engages in or tolerates “severe” violations of religious freedom, the resolution added. Formed in 1998, USCIRF monitors rights related to freedom of religion or belief abroad and makes policy recommendations to the U.S. president, the secretary of state, and Congress.

Liberty Coalition Canada (LCC), an advocacy group for human rights and constitutional freedoms with legal backing, said in a statement that it has been working closely with Republican representatives Reggie Stoltzfus and Timothy Ginter on the resolution.

LCC said it has provided the Ohio representatives with written testimonies collected from across Canada, as well as in-person proponent testimonies by others including LCC president Michael Thiessen and Greg Hill from Free to Fly Canada, a non-profit representing a group of aviation professionals and passengers who oppose COVID-19 vaccine mandates.

They cite examples such as the razing and vandalization of church buildings, preventing church congregations from gathering, and imposing heavy fines or imprisonment for pastors who held worship services amid pandemic restrictions.

The resolution cited the case of James Coates, a pastor of GraceLife Church in Edmonton who was jailed for 35 days after refusing to follow a condition of his bail release that required him to halt in-person church services while lockdown restrictions were in place.

It also noted the case of Calgary pastor Artur Pawlowski, who was arrested for organizing church services that did not conform to social distancing and mask-wearing requirements mandated by Alberta Health Services (AHS).

“Pastor Coates, and perhaps other Canadian pastors, have held services in undisclosed locations, essentially going underground, in order to avoid persecution by government authorities, and to allay congregant’s fears,” the resolution said.

Pawlowski, who was arrested several times during the pandemic, was given the longest jail term of 51 days this winter after speaking at a rally in support of the convoy protest at the Coutts border crossing on Feb. 3.

The resolution said the restriction orders by AHS that prohibited in-person faith group meetings and other religious gatherings in private homes intrude “into the most sacred liberties of its citizens, those of religious freedom and privacy.”

The Ohio representatives also stated in the resolution that the Liberal government’s new law Bill C-4, which bans the practice of conversion therapy in Canada, has a chilling effect on religious liberties due to its “overly broad” scope.

“This act is overly broad in scope and has potential negative implications for religious liberties and expression, including a prison sentence of up to five years for merely expressing a biblical view of marriage, thus restricting the ability of religious leaders from expressing sincerely held religious beliefs on marriage and sexuality,” the representatives said.