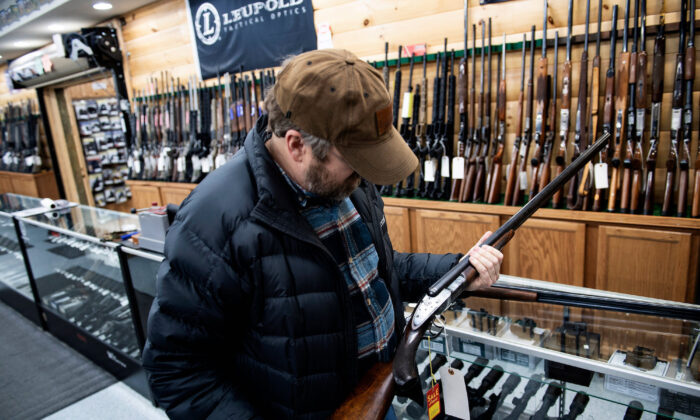 A customer looks at an antique shotgun at a gun shop in Ottawa, Ohio, on Jan. 23, 2020. (Brendan Smialowski/AFP via Getty Images)
US News

Ohio Gov. Mike DeWine on Monday signed a new bill into law, eliminating a duty to retreat before using a firearm in self-defense in his state.

The law, which passed the Republican-dominated state legislature last month as Senate Bill 175, expands the locations where an individual can shoot an attacker with a gun without first trying to flee from the person’s residence or vehicle to any place, so long as it’s legal for the person to be there.

It also specifies that when determining whether a person shot someone else in self-defense, a court should no longer take the possibility to retreat into consideration.

The newly-signed legislation makes Ohio the 26th state to adopt what’s commonly known as “Stand Your Ground” doctrine into the legal code, according to the National Conference of State Legislatures.

“I have always believed that it is vital that law-abiding citizens have the right to legally protect themselves when confronted with a life-threatening situation,” DeWine said in a statement. “While campaigning for Governor, I expressed my support for removing the ambiguity in Ohio’s self-defense law, and Senate Bill 175 accomplishes this goal.”

DeWine added that he was “very disappointed” that the legislation did not include the gun control measures he proposed in 2019 following the deadly shooting in Dayton, Ohio. He said those measures, such as enhanced background checks, would make it harder for “dangerous criminals to illegally possess and use guns.”

“The provisions I am requesting in no way infringe upon the constitutional rights of law-abiding citizens to own firearms,” the Republican governor said. “These provisions will save lives. These provisions need to become law.”

“Gov. DeWine came to our city and stood on stage for a vigil for our murdered friends and neighbors and then told us he stood with our community in our fight against gun violence. Now it seems he does not,” Whaley wrote on Twitter. “Gov. DeWine has made clear he opposes this dangerous policy, but he once again folded to the extreme elements of his own party.”

Meanwhile, the change was applauded by organizations in favor of gun rights, including the National Rifle Association.

“Crimes can happen quickly and without warning. Most victims have a split second to react with the best course of action for their survival,” John Weber, state director for the National Rifle Association Institute for Legislative Action, said in a statement. “By signing SB 175, Gov. DeWine ensures the law favors victims and not criminals.”