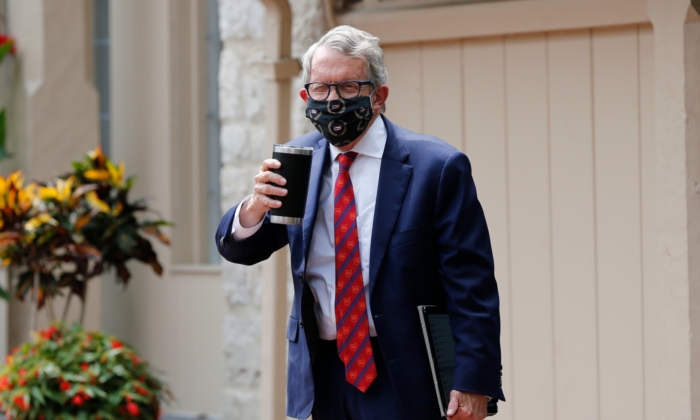 Ohio Gov. Mike DeWine acknowledges members of the media while entering his residence after testing positive for COVID-19 earlier in the day in Bexley, Ohio, on Aug. 6, 2020. (Jay LaPrete/AP photo)
US News

The legislation will allow betting on sports such as basketball, baseball, football, golf, hockey, and others beginning in mid-March of 2022.

The bill’s passage and the governor’s signature come three years after much discussion and debate over the issue in Ohio. Other states, including Pennsylvania, Michigan, Indiana, and West Virginia, established legal sports betting following the 2018 U.S. Supreme Court ruling that overturned the federal ban on state authorization of sports betting.

In past statements, DeWine has said that “sports gaming already is in Ohio. It’s just not being regulated.”

Licenses for establishments do come with a price, depending on what type of organization or venue is applying for them. The costs start at $1,000 for an establishment with a liquor license such as a bar or restaurant and up to $1 million for a professional sports team, Franks said.

Sports teams likely would have a physical “sportsbook,” or betting book at a counter or window at the facility, and if they wanted another or second licensed entity to handle bets for them, it would cost them $1.5 million in addition to the $1 million fee, Franks said.

Sports betting is planned to be in place no later than Jan. 1, 2023, Ohio Casino Control Commission spokesperson Jessica Franks told the Epoch Times on Thursday.

“At the moment, we are working on the rules and drafting the applications,” Franks said. “We need time to do that. We anticipate to have the function in place in the summer of 2022. We can’t do anything until the law goes into effect.”

There will be three levels or types of licenses that professional sports teams, businesses, or establishments with liquor licenses can apply for, Franks said.

There will be up to 25 licenses for online betting through professional sports organizations and existing casinos, likely in partnership with a sportsbook company to manage betting.

There will be 40 licenses for physical locations with betting terminals and windows. They’re expected to mostly be at existing casinos and racinos. Owners of the first type of license must also hold the second type

There also will be licenses for up to 20 companies to supply self-service or clerk-operated gaming kiosks, which could be placed in an unlimited number of bars, bowling alleys, and restaurants that hold liquor permits.

“There have been a good number of places expressing interest in having licenses, but it still leaves a lot of them available,” Franks added. “We have a preference for professional sports teams and brick and mortar establishments to have the licenses.”

Bars or restaurants could have a maximum of two kiosks or clerk stations where bets could be placed, Franks said.

The bill made its way to DeWine’s desk earlier this month. Entities with licenses will pay a 10 percent tax with the majority of the revenue going to schools and veterans’ programs. Two percent will go toward gambling problem programs.

Two of the bill’s sponsors, state Reps. Scott Wiggam (R) and Adam Miller (D) could not be reached for comment.