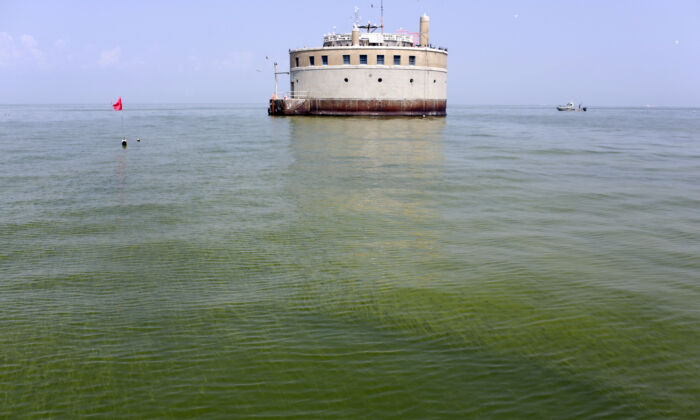 The City of Toledo water intake crib in Lake Erie, is surrounded by algae, Aug. 3, 2014. The intake is about 2.5 miles off the shore of Curtice, Ohio. (AP Photo/Haraz N. Ghanbari)
US News

Ohio Gov. Mike DeWine on Dec. 8 announced more than $100 million in grants for municipalities to improve water quality and infrastructure.

The grants total $109 million for 101 drinking—and wastewater—infrastructure projects across the state, covering all 88 of the Buckeye State’s counties.

They are part of the H2Ohio initiative that DeWine announced in October, which included $250 million in grants awarded to municipalities for 183 water-related projects.

The funds are to improve and safeguard water quality, and infrastructure, for one of the state’s most valuable resources.

DeWine announced the third and final round of grants in Marion County’s Waldo Township, north of Delaware.

Covering a wide range of small to large projects, they are expected to help communities facing critical water issues over the next two years.

The funding was made possible through the Ohio General Assembly, as part of House Bill 168.

It was sponsored by State Representatives Mark Fraizer (R-Newark) and Mike Loychik (R-Bazetta), with funding appropriated through the American Rescue Plan Act (ARPA) in 2019. The first two rounds of grants were announced in October and November.

“Clean drinking water is part of the foundation for a good quality of life,”  DeWine said, yet too many communities in Ohio can’t be reliably provided with that basic necessity due to crumbling infrastructure that is too expensive to repair.

Waldo Township has a population of 338, according to the 2010 Census, and is receiving a $2.5 million grant to put toward the construction of a public water system. It will replace the current decades-old wells, and help with long-term water supplies.

The project is being carried out by Del-Co Water of Delaware, and construction is expected to begin in June and last nine to 12 months, according to Kris Dye, the company’s chief business officer.

The new water system also will alleviate a long-standing safety issue over the lack of fire hydrants and enable the Fort Morrow Dire District better access to water in the event of a fire.

“The funds for this project are a godsend,” Dye said. “Not only will it help improve water delivery, it also will provide a better system for the fire department in the event of a fire and encourage economic development.”

Dye went on to say that due to supply chain issues brought on by COVID-19, they may have to wait a little longer for materials, and hoped there wouldn’t be any delays in the project.

“Ever since we’ve had COVID dumped in our lap, it has wreaked havoc on our projects,” Dye told the Epoch Times. “We don’t anticipate any delays with this project, and hope the supply chain issues are better when the project is scheduled to move forward.”

Waldo is along State Route 23 and is best known as the home of the G & R Tavern, which boasts the best fried bologna sandwich in Ohio.

The 60-year-old establishment sells about 150,000 fried bologna sandwiches a year, and one was delivered to DeWine on Tuesday, G & R Tavern Manager Rick Lathrop told the Epoch Times.

Lathrop, a 25-year resident of Waldo, said that although he has no problems with his well, he supported the new water system.

“We’re going to roll with it,” Lathrop said.

“It will be city water, and it will be more purified, which should make it better.

“I’m in support of it. I believe it will provide a better quality of water, and modernize our system.”

Bruce Baker, the Mayor of Waldo for the past 27 years, said the water in city’s wells was “not the greatest,” and plans were under way for a housing development in the northwest part of Waldo, and the project needed water and sewer hook-ups.

“It’ll all be new,” Baker said of the planned water system. “The water we have here now is very hard and has a lot of iron in it. The new system shall, and will, be a great asset.”

On a much larger scale, there also was $15 million of the ARPA funds set aside to help clean up the algae blooms in Lake Erie, along what often is referred to as Ohio’s North Coast.

The blue-green toxic algae is an annual problem in the lake, from Toledo east to the islands, Put-in-Bay and Kellys Island, popular summer tourist spots.

The algae turns fresh water into a pea soup-like color, with thick mats of scum that can close beaches, hurt fishing and contaminate drinking water, as it did in Toledo in 2014.

The worst blooms in the past decade have been 2011 and 2015, according to scientists from the National Oceanic and Atmospheric Administration, which monitors the algae problem.

This year, scientists have predicted smaller algal blooms on Lake Erie, but believe they can be more severe, according to the administration.

Since the grant application process started last July, the Ohio Department of Development received more than 1,200 requests for $1.4 billion in funding, according to DeWine’s office.

“My administration is committed to helping our communities address these important water issues, and we look forward to additional discussions with the General Assembly about the potential of expanding this program with additional funds,” he said.

“We want our children and grandchildren to stay in Ohio, and having clean, safe drinking water is important to our communities for the quality of life.”