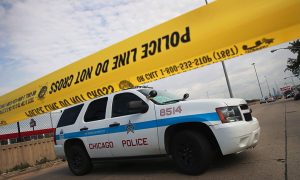 Ohio Detective in ‘Grave’ Condition After Being Shot Twice in Face

An Ohio detective is in “grave” condition and remains on life support after he was shot twice in the face while serving a drug-related warrant, authorities said on Tuesday.

Police Chief Richard Biehl later said that DelRio’s injuries are “not survivable,” according to the Dayton Daily News on Wednesday.

DelRio, who has been employed by the DEA Task Force for nearly two decades, is currently on advanced life support, Biehl said Tuesday, Defense Maven reported.

“Det. DelRio was struck twice in the face and those bullets penetrated deep. So his condition is grave,” he said.

The incident took place just before 7 p.m. on Monday, when detectives entered a home in the 1400 block of Ruskin Rd. after announcing themselves as law enforcement officers, police said.

As DelRio attempted to go down the basement stairs, he was shot twice in the face. He reportedly managed to return fire with one shot, before he collapsed.

Fellow officers rushed him to Grandview Medical Center in a police vehicle as his wounds were so severe there was no time to wait for an ambulance. No other injuries were reported.

Dayton Police Department wrote on Twitter on Tuesday: “Det. DelRio is currently on advanced life support at the hospital and his condition is considered grave. Again, please keep him and his family in your thoughts, prayers, and care.”

The department added on Wednesday: “We are both humbled & grateful for the outpouring of support we’ve received for Det. Jorge DelRio, his family & friends & his law enforcement family. A former DEA colleague of Det. DelRio said, ‘Jorge, regardless of agency, brought people together.’ And he continues to do so.”

Several suspects, all male, who were inside the building at the time of the incident, were taken into custody by police. One juvenile male was caught as he attempted to flee across the front yard.

The man who is suspected of shooting DelRio, Nathan Goddard, 39, has been charged with felonious assault on an agent, the U.S Attorney for the Southern District of Ohio Dave DeVillers told reporters.

Weapons recovered at the scene included two loaded pistols and an AR pistol each with 30-round magazines, investigators said. Agents also found at least $44,000 in cash, 51 pounds of marijuana, and 13 kilos of fentanyl and cocaine in the basement.

In an emotional speech, Biehl on Tuesday praised DelRio as a dedicated police officer who had changed the lives of countless Dayton residents through his work with the department since he joined in 1989, Dayton Daily News reported.

“His work had impact regionally, nationally, and internationally,” Biehl said. “He was that good at what he did. He loved what he did.”

DelRio received seven written commendations, two letters of appreciation, and one unit citation throughout his career.

“Through his own sacrifice and peril, Jorge exemplifies the Dayton Police Department’s motto, ‘Honor through service and service through honor’,” Biehl added.