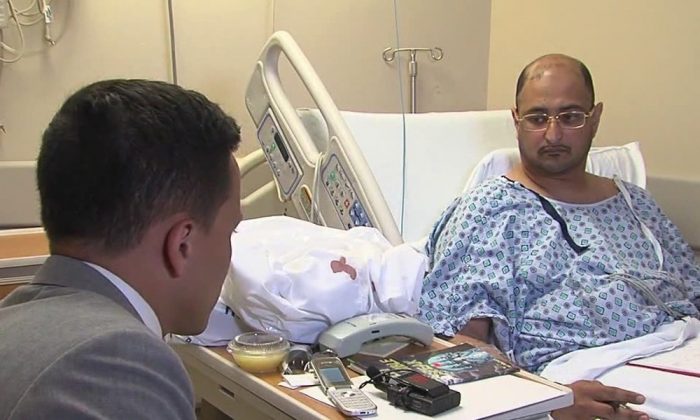 In this June 29, 2016 frame from video, Ahmed al-Menhali, right, is interviewed by WEWS at St. John Medical Center after he collapsed following an encounter with police in Avon, Ohio. Al-Menhali's treatment outside a hotel in Avon, Ohio, became front-page news in the Emirates, a key U.S. ally that is home to the commercial hub of Dubai, and prompted the federation's government to formally summon a U.S. diplomat for an explanation. (WEWS via AP)
US

An Ohio city is apologizing after a Emirati citizen mistaken for being an ISIS terrorist was forcefully pinned to the ground by police, causing him to collapse.

In a statement, Bryan K. Jensen, the mayor of Avalon, Ohio, said that the arrest of Ahmed al-Menhali, a businessman from the United Arab Emirates, was part of the police department’s “standard response protocol” and that officers immediately apologized to him after the facts became clear. Menhali was wearing a traditional headscarf and robe.

“This was a very unfortunate incident and does not reflect our community,” Jensen’s statement read.

The United Arab Emirates embassy adds in a statement that they been in close contact with Menhali and his family since the incident and urged Jensen to offer an apology—prompting Jensen and Avon’s police chief to meet with Menhali to issue an apology.

The Cleveland chapter of the Council on American-Islamic Relations (CAIR-Cleveland) commended the efforts of police and officials for apologizing to Menhali and handling the situation appropriately.

“We commend City of Avon officials for taking an important step toward helping to resolve this matter. Instead of retreating behind a wall of silence, they came forward swiftly to unequivocally exonerate Mr. Al Menhali, which is extremely important in restoring his dignity and reputation,” said CAIR-Cleveland Executive Director Julia A. Shearson.

The incident happened June 29 when police received separate 911 calls from the sister and father of a desk clerk at the Fairfield Inn & Suites, which referred to a man in the hotel lobby “in full headdress with multiple disposable phones pledging his allegiance to ISIS.”

In actuality, Menhali had been using two phones to find a place to stay in Cleveland. When police arrived, he didn’t know what was going on and followed orders perfunctorily. Soon enough, he realized the police’s intent. His arrest was captured in a video.

While under arrest, Menhali collapsed to the ground and suffered a light stroke. He was hospitalized Sunday.

Menhali, the owner of a marketing company in the UAE, had originally been in the United States on a tourist visa for the treatment of a medical condition.

At the same time, the United Arab Emirates said its citizens need to take caution while traveling abroad due to “security developments in some European countries, triggered by the unfolding unrest in the Middle East region, and their fallout, especially the refugee crisis.”