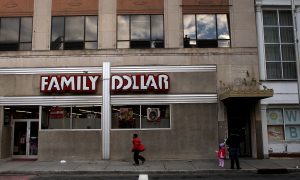 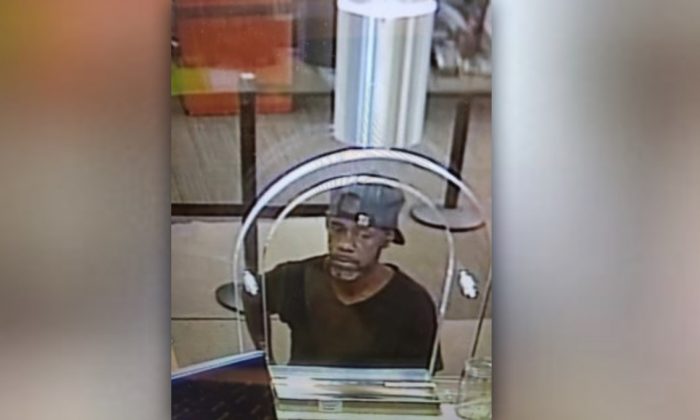 A surveillance camera still showing Michael Harrell, a suspect in a bank robbery in Cleveland, Ohio, on July 29, 2019. (Cleveland Division of the FBI)
Crime and Incidents

FBI sources cited by WJW allege 54-year-old Michael Harrell walked into a U.S. Bank in Cleveland at around 11 a.m. on Monday and handed a piece of paper to an employee demanding money.

The message requesting cash was written on the back of a document from the Ohio Bureau of Motor Vehicles and contained the suspect’s personally identifiable information.

“When the teller took the note, and looked at it and looked at the other side, she saw his name,” said Special Agent Vicki Anderson, of the FBI’s Cleveland field office, according to WJW. “He had used a note that he had used earlier at the BMV and it had his name on it.”

The teller gave the suspect an unspecified amount of cash and called the police.

According to Fox, authorities issued a warrant for Harrel’s arrest but at the time of reporting, he remained at large.

‘Not the Brightest Bulb’

“Not the brightest bulb on the Christmas tree!” wrote one commenter.

Another recounted a similar story, writing, “My daughter’s ex bf vandalized our car and left a threatening note on the windshield which was on the back of a piece of paper that had his resume on it!”

Someone else said, “If he was homeless and needed a home for the rest of his days, this is the way to do it.”

The incident follows the case of a store clerk in Kansas who shot an armed robber dead on June 10 after the man jumped over the counter with a gun.

Brim was pronounced dead on the scene.

Jewelry Store Clerks Use Swords to Fight Off Robbers

The case is reminiscent of another attempted armed robbery in Ontario, Canada, when on Nov. 21, employees at a jewelry store used swords to fend off robbers wielding guns and hammers.

Four assailants captured on security footage are seen using a hammer to break into Ashok Jewellers in Mississauga, in broad daylight, according to Peel Regional Police.

“Four suspects attempted to gain entry to the store by breaking a window at which point the employees were able to fend off the suspects who then fled the area,” the police said.

The suspects were captured on security cameras outside the store exiting a vehicle before approaching the store.

Video from inside the store shows one of the intruders breaking the window with what appears to be a large hammer.

Owners of Ashok Jewellers in Mississauga sent me this surveillance footage — three people using swords to fend off a daylight robbery attempt on Wednesday. @globalnewsto pic.twitter.com/UjDb1kn2w7

An employee and a customer were standing just several feet away, according to the Canadian Broadcasting Corporation (CBC), as the assailants shattered the glass and tried to force their way inside.

As one of the suspects tried to climb in through the broken window, three people inside the store charge toward the intruder, swinging sabre-style swords.

“When we saw them coming in, that’s when we really took action and we rushed them,” said Arjun Kumar, the son of the store’s owner, according to CBC.

The suspect then leaves the store through the broken window, while another masked man approaches the window and points what appears to be a handgun toward the three men.

Kumar told CBC reporters that the suspect tried to fire the weapon, but the gun jammed.

“They had a gun but my main concern was, I wanted them to not get into my store,” he explained. “I was willing to do anything to keep them out. Even if it meant me getting shot, not a problem.”

Investigators asked the public to help identify the suspects.

Kumar told reporters that the swords were gifts from a family friend, and that he was lucky that they were on hand.

“I think a lot of people want to naturally defend what’s theirs. At the same time, we don’t want people doing things that would cause any harm to themselves,” Marttini said, according to CBC.

“Safety is first and foremost. At the end of the day, property is property,” he said.