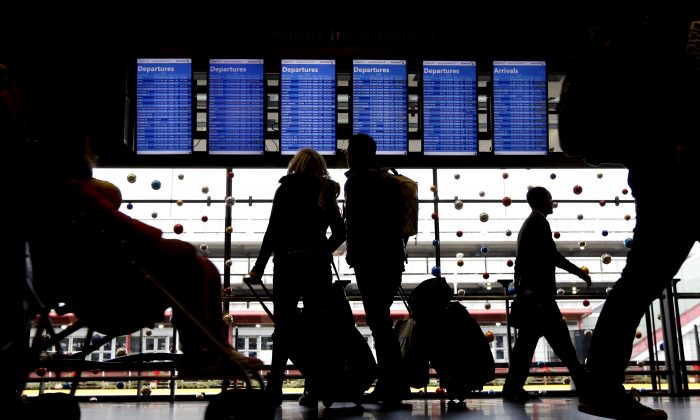 In this Nov. 29, 2015 file photo, travelers walk to their gates at O'Hare International Airport in Chicago. Airlines are shifting the timing of thousands of flights, even adding dozens of redeyes, as they try to avoid delays while hauling millions of passengers from now through the Christmas weekend. Success or failure could all depend on the weather.(AP Photo/Nam Y. Huh, File)
US

A new report says that the nearly 300 unarmed police patrolling O’Hare and Midway airports in Chicago were told to go “run and hide” during an active shooting.

CNN obtained internal aviation documents that said officers should not “become part of the response” to an attack.

“If evacuation is not possible, you should find a place to hide where the active shooter is less likely to find you. Block entry to your hiding place and lock the door,” the internal memo said.

“We must also ensure that unarmed security personnel … do not attempt to become part of the response, but could be invaluable to the evacuation efforts,” the documents added.

The officers at the two airports are certified police officers in the state of Illinois, but they don’t carry guns. They’re under the jurisdiction of the Chicago Police Department.

“If evacuation is not possible: hide,” the documents state. Locking doors, turning off the lights, and staying quiet are better alternatives to directly responding, the papers added.

According to the video, “If evacuation is not possible, you should find a place to hide where the active shooter is less likely to find you. Block entry to your hiding place and lock the door.”

CNN interviewed aviation police officers, who said they aren’t please with not being able to carry guns.

“We’re not trying to replace the Chicago police officers; we just want to have the tools to do the job like every other law enforcement agency in the country,” said one officer, who was not identified.

“We’re nothing but casualties if you tell us to run and hide. And how can the public look at us if they see police officers running and hiding? That goes against the very oath we were sworn to that we took.”

Speaking with CNN, Wayne Black, a security expert based in Miami, said the no guns policy is bizarre.

“I’ve never heard of anything so crazy,” Black told the network. “I mean, the concept in a post-9/11 world of having sworn law enforcement officers unarmed at an airport, not being able to take direct action — I don’t know what they are thinking.”

“Who in their right mind would have sworn law enforcement officers wearing a sign on their back that says police and wearing a badge on their chest and being unarmed?” he questioned.

The two airports’ controversial no weapons policy has been in place for two decades.

But the Chicago Aviation Department told CNN that airport officials feel the strategy is fine.

“We think the strategy in place is working,” said Owen Kilmer, who is the deputy communications director of the Chicago Aviation Department.

He said, “The current security structure in place, violent crime incidents at O’Hare and Midway airports are extremely low — ensuring that the millions of passengers who fly through Chicago each year feel secure at the airports.”

Airport shootings are fairly rare, but in November 2013, a 23-year-old man shot and killed a U.S. Transportation Security Administration officer and injured several other people.

In September 2015, Reuters reported that there was a record number of guns found in U.S. airport searches.

U.S. airport security agents discovered a record 67 firearms in luggage that passengers intended to carry on to airplanes during one week in September, Reuters said. Of the 67 guns, 56 were loaded and 26 had a round in the chamber.

TSA officers have found more than 2,000 firearms in airport security checkpoints across U.S. airports from January 2015 to September 2015, the report added.